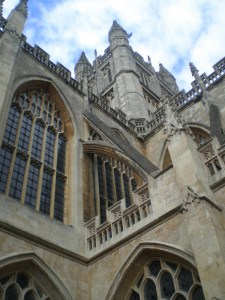 Well who doesn’t enjoy pretending to be in Jane Austen novels and generally flouncing about in historical locations? Certainly not me, as I had a brilliant time in ‘historical’ Bath, which shoved its history in your face at every corner, but in an endearing way. Costumed guides? Check. Every other building named after a Jane Austen novel/character/place? Check. A ye olde tea room on every street? Check. It all added up to a holiday as only good old England can do, and once I had recovered from five days of camping in a sodden field and feeling like the dampness and tiredness would never end, I got into being a tourist and got my camera out at every opportunity!

Like every self respecting Bibliophile, my first stop was the Oxfam Bookshop. An excellent selection of books, plenty of Viragos (so many I had to leave several behind, so if you’re in the vicinity, get there as soon as you can!), and for a tenner I became the new owner of old green Virago copies of A Pin to See the Peepshow, The Soul of Kindnessand A Game of Hide and Seek, and a biography of Winston Churchill’s mother Jennie Jerome, one of the first ‘Dollar Princesses’ and her sisters, called Fortune’s Daughters, that I’d been wanting to read for a while.

e Jane Austen Museum, which was nice but frankly a bit disappointing; I’d expected more from my £7 entrance fee than some displays showing the historical context of early 19thc Bath and a few costumes from not very well known adaptations. Jane Austen doesn’t even have a connection with the building the museum is housed in. If you’re going to Bath and were fancying a trip, I’d advise you skip it if you already have a good knowledge of Austen and her books. I’ve heard Chawton, her cottage in Hampshire, is much better for getting a real feel of Austen and how she lived, so I shall try that for my next trip outside of London.

We followed this up by a trip to the Abbey which was absolutely stunning. The walls are literally covered in commemorative plaques to the good, great and also ordinary citizens of Bath from the 1600s to the Victorian times. Absolutely fascinating, and humbling, and wonderful to be able to see a glimpse of what these now largely unknown people meant to those they left behind.

The next day we went to the Assembly Rooms and Fashion Museum which was housing a touring V&A exhibition on The Supremes (work follows me, it seems) alongside its usual displays. It was fantastic and as I have a particular interest in the history of fashion this was one of my favourite Bath sights. The Assembly Rooms were very interesting too but I didn’t really get an impression of the space as the Supremes exhibition was taking up the ballroom.

After this we went to the Circus and the Royal Crescent, which we ran along Anne Elliot style, much to the amusement of passers by. The architecture in Bath really is breathtaking; its uniformity is very soothing to the eye and it is fantastic to see how new buildings have to conform to the stonework and style of Georgian Bath. The grandeur of the Crescent, looking down over onto the hills beyond was wonderful, and I almost had a moment of thinking I would like to live there, but then I pulled myself together…I am a Londoner, after all.

I came across a terrific independent bookshop down a side street, Mr B’s, which sold Persephones and the anniversary hardback Viragos…and upstairs they had a Reading Booth where you can pay by the hour to have sole use of a soothing room in which to enjoy uninterrupted reading…it’s a truly delightful shop and well worth a visit.

terday…we went to Tyntesfield, a fairly newly acquired National Trust property that is covered in scaffolding as it’s a ‘live conservation’ project, the Trust’s first. Fully restored, it will be amazing; it’s a Victorian gothic pile that had a collossal amount of money spent on it at the time, inside and out, to create an authentic ‘Gothic’ look. The inside was stunning but in a very bad condition, and like the land time forgot…old perambulators, umbrellas, toys, etc, just hanging about as if the family just upped and left yesterday. It was fascinating to see the conservation in progress and to understand a little more the sheer scale of work that goes into bringing a property up to a standard that will allow public access. I shall be sure to go back in a few years’ time to see the completed work.

After Tyntesfield our final stop was The American Museum in Britain, the only museum of Americana outside of the US. It was hands down one of the best museums I’ve ever been in. Interactive, interesting and varied displays, striking objects, and a wonderful layout, not to mention a brilliant exhibition on Folk Art and a world renowned collection of stunning quilts. I would have driven from London to Bath for the day just to visit, it’s that good. The cafe does excellent cakes and cookies too, and there’s a lovely gift shop that’s set out like a General Store. AND you get to dress up as a pioneer!! Please do go if you get the chance.

I’m now at home and exhausted. But I must finish Dorothy Whipple’s The Closed Door and Other Stories so that I feel I haven’t missed out on Persephone Week completely. Review forthcoming!

I hope you enjoy the pictures. Oh, and please do look at Naomi’s wonderful blog that I recently discovered after she emailed me…it turns out we work down the corridor from one another at the V&A and I have now been busted at my habit of blogging whilst at work…tsk tsk!!!