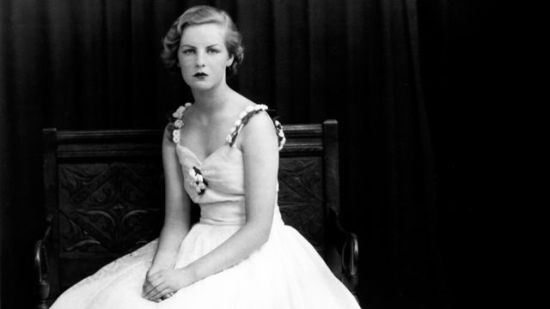 I have been waiting months to read this, as it seems the entire membership of the New York Public Library was in line to read it before me, and they well and truly took their time! However, the wait was absolutely worthwhile and I was enthralled throughout this delightful volume of memoirs from the last surviving Mitford sister. I adore reading everything I can about the eccentric, witty, unconventional and beautiful Mitford sisters, whose lives spanned the tumultuous 20th century and who counted Hitler, Churchill, JFK and the Prince of Wales, among others, as their friends. Debo, the youngest of the clan, never courted fame or controversy like her older sisters; she married Andrew, second son of the Duke of Devonshire, at 21, and settled down to what she thought would be an unremarkable existence as an officer’s wife. Little did she know that three years later Andrew’s older brother Billy, married to JFK’s sister Kick Kennedy, would be killed in action, and that at 30, she and her beloved Andrew would become the Duke and Duchess of Devonshire, and responsible for some of the largest and most prestigious country estates in England.

Debo, now in her nineties, uses Wait for Me! as her opportunity to debunk many of the myths about the Mitford clan that have sprung up through the exagerrations of real life people Nancy used in her novels, and the outlandish claims of Decca in her often fictionalised memoirs of her childhood. The early chapters focus on her experience of growing up; of her relationships with her parents and siblings and the household staff, of the variety of ever shabbier homes the family lived in, of the shooting parties and dances and the glamour of 1930’s society. Debo was 16 years younger than Nancy, and was still in her teens when Diana ran off with Oswald Mosley and Unity went off to Germany and fell in love with Hitler. She barely knew these glamorous, beautiful older sisters, who called her ‘Stubby’ and ‘Nine’ because of her short legs and supposed stupidity (Nancy coined the ‘nine’ nickname as she thought it was Debo’s permanent mental age). It’s interesting how all of the drama and unhappiness of this time seemed to largely wash over Debo’s head; she was more interested in her London season and going to parties and balls and meeting eligible young men.

Debo really comes into her own when she describes her life as a wife and as the Duchess of Devonshire. I found myself moved in several places as she described the struggles of her husband’s alcoholism, the sad deaths of those she loved in the war, the devastation of losing three of her children shortly after their births, and of the deaths of her parents and sisters as she reached her seventies and found herself the only one left of the once sprawling Mitford clan. She has a very matter of fact writing style, and does not go in for lots of gory details, melodrama or displays of emotion, but she manages to convey just how deeply her experiences impacted her life in just a few well chosen words, proving that Nancy’s dimissive ‘Nine’ nickname was certainly nowhere near the truth.

I loved the tales of Debo’s mingling with the great and good, finding herself intimate friends with JFK due to her friendship with his sister, spending weekends with the Prince of Wales, playing host to the likes of Evelyn Waugh and Duncan Grant; it was a charmed life, and the most endearing thing about Debo is that she knows it was, and is grateful for it. There is no sense of smug entitlement, or of the blase, about these memoirs; Debo’s sense of awe and her knowledge of her good fortune, and frequent assertion that she was not in any way deserving of it, is refreshing to read in our days of self serving celebrity. She traveled extensively, hobnobbed with the stars, was present at JFK’s inauguration and funeral and the Queen’s coronation, and did all this while running the massively successful Chatsworth estate, bringing up three children and taking part in the variety of charitable and ceremonial activities expected as part of her role as the wife of one of the most senior peers. She was, and is, quite the woman.

Debo doesn’t judge or condemn any of her sisters for their controversial views, apart from Nancy, who she found out, after her death, had been the reason why her most beloved sister Diana was imprisoned during the war. She separates their views from their personalities, and to her, they were just her wonderful, often maddening, but always beloved, sisters, and their extreme views are not of interest to her, or worth discussing. She is very sympathetic towards Diana and Unity, and this seems to have enraged a previous reader of my library copy, who has written rather hilariously snarky comments in big black capitals next to every mention Debo makes of Diana’s kindness etc with comments such as ‘OH REALLY? WHAT ABOUT THE FACT THAT SHE WAS A NAZI AND DENIED THE HOLOCAUST?!” etc. I thought this was a bit much. I love my older sister to distraction, and if she decided to become a Nazi tomorrow, that love for her wouldn’t change; you can disagree with someone’s viewpoints and still love them, and I admire Debo for writing about her sisters with affection and equanimity despite their difficult and unpopular political standpoints.

All in all, this is a lovely, fascinating and warm memoir, written at an emotional distance that perhaps some wouldn’t like – used, as we are, to the tell-all memoirs that have become popular in recent years – but I wasn’t expecting Debo to be overly candid, and as such, I wasn’t disappointed by this. The main interest I have in Debo is in her relationship with her sisters and how she performed her duties as a Duchess and went about turning around the fortunes of Chatsworth House, and this delivered the goods in every department. I don’t need to know the nitty gritty of her marriage, or of her relationship with her children, and I wouldn’t expect her to be overly personal about such things when she has an extensive family who are still alive and could be offended by excessive amounts of disclosure about their personal lives. I loved Debo’s voice, I loved her generous, wise, grateful and matter of fact outlook on life, and her wonderfully funny anecdotes of her friendships with some of the most interesting people to grace the 20th century. She comes across as a thoroughly lovely woman, devoted to her family, friends, staff, and land, and her simple goodness has never been touched or changed by the privilege she has humbly enjoyed for so many years. It was refreshing to read, and a delight from start to finish. Highly recommended!

Also, I totally forgot to announce the winner of Life in Miniature from weeks ago, sorry – Mystica, congratulations! Please email me with your address!