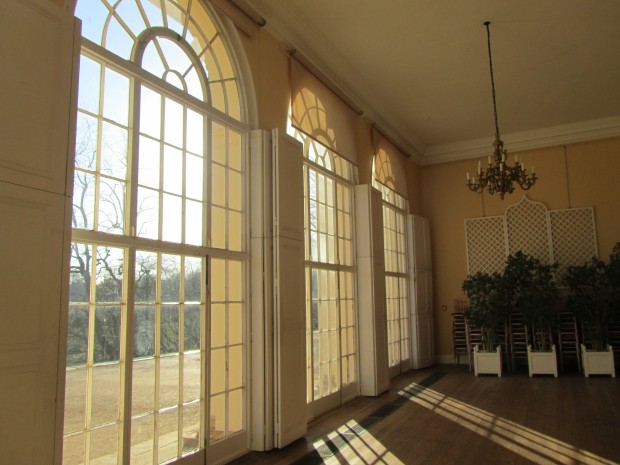 On the edge of Hampstead Heath sits a beautiful white stuccoed Adam-designed villa, perched atop a hill that provides breathtaking views of the London skyline. Kenwood House dates from the 1600s and would once have been a country home; now it is part of the London suburb of Hampstead, that, though still retaining its village charm, is less than half an hour on the tube from central London. It was bequeathed to the nation in 1927 by Edward Guiness, 1st Earl of Iveagh (who was once Diana Mitford’s grandfather-in-law), and it is an absolutely wonderful treasure trove of sumptuous rooms, gorgeous furniture and impressive paintings, including a Rembrandt self portrait. It is not an overwhelmingly large house; in fact, it’s quite small, considering the amount of land it is surrounded by. It was designed to make the most of the gorgeous views across the Heath, and the sunny, light filled rooms all frame the lovely vistas that unfold from every angle. Every room is a delight, and I especially loved the Orangery, which was absolutely filled with sunshine as one wall is made up of floor to ceiling sash windows. I could have spent all day in there gazing across the Heath, which today was crowned by a bright blue (yet freezing) sky and was an ever changing, swaying mass of lacy branched trees, smudgy brown and green bushes and acres of undulating grass that could have been in the wilds of the Yorkshire Moors rather than a mere stone’s throw from the hustle and bustle of Oxford Circus.

Kenwood House has been featured in several films; I recognised it from Notting Hill, in the scene when Julia Roberts is filming a Henry James adaptation and Hugh Grant comes to try and win her back. It really is a magnificent setting, and you would never know you were in the vicinity of London at all until you mount the top of the hill outside the back of the house and are suddenly greeted with the incredible sight of London spread like a blanket before you, its skyscrapers shimmering hazily on the horizon. 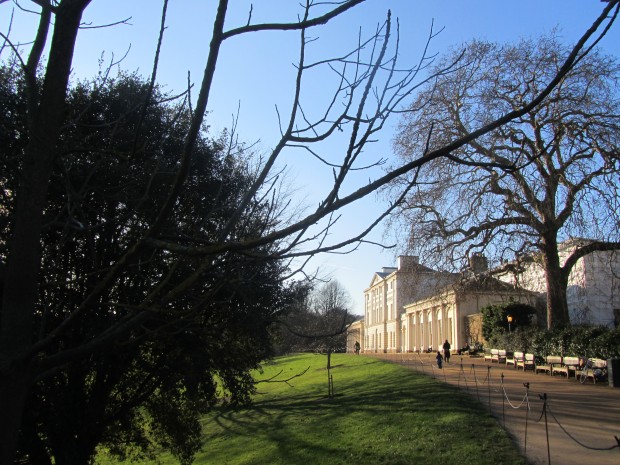 As of April, the house will be closed for 18 months to carry out essential restoration, particularly on the servants’ wings. I hope they are going to put back the original features of the servant’s wing and make it into an authentic recreation of the lives of the teeming mass of servants who would have cleaned the miles of corridors and served up sumptuous banquets in the chandeliered dining room. As much as I love wandering through the rooms of stately homes, you never really get a real insight into how real life was lived there. No one can lie with their feet up watching tv on a 17th century silk and gilt sofa surrounded by Rembrandts, can they?! Servants’ quarters show the reality of most people’s lives on these huge old estates and I am looking forward to going back in 18 months’ time to see what the restoration work has revealed.