Did anyone watch My So-Called Life, with Claire Danes (who is now in the amazing new – for us Brits – Homeland that is the latest TV series I am dangerously addicted to)?! I loved it. It perfectly encapsulated the awkwardness of the teenage years and I was devastated when I got to the end of the series – according to imdb I was 9 when it aired so I must have watched a repeat, alongside Party of Five, another much missed show that my brother, sister and I used to watch whilst lying on our stomachs in front of the TV, supposedly ‘doing our homework’. Oh those halcyon days of carefree joy!

I digress. This post is supposed to be about some non book related things I’ve been getting up to. Obviously I’ve been watching a lot of TV because it’s the end of the month and I have no money – alongside Homeland, I tried out the new Upstairs Downstairs on Sunday, but it’s no Downton Abbey and I was bored silly until Lady Persie showed up as a blatantly plagiarised Unity Mitford and made things far more interesting. Ed Stoppard (who knew he was the Tom Stoppard’s son?!) might be knee weakeningly handsome but it’s all just too earnest – Downton Abbey has ruined me and now I want post coital death and cheesy knees-up-mother-brown concerts with uncannily well-timed strategic entrances and lots of gazing into the middle distance with tear glazed eyes otherwise I am NOT SATISFIED. So, unfortunately, the well written, sensible (apart from the monkey) and very historically accurate Upstairs Downstairs is not going to get very far with me.

I went back to Kent for the weekend – my friend Emma and I had a lovely, if rainy, day out at Penshurst Place, which is a gorgeous, still privately owned manor house near Sevenoaks. It was the home of the Elizabethan poet, Sir Philip Sidney, and was visited on several occasions by Elizabeth I. The most impressive room is the original medieval hall, built in 1341, which is often used in films. The room guide took great pleasure in telling me about his experiences with film crews and Hollywood actors; the latest film to be made there was The Other Boleyn Girl, and apparently Natalie Portman was ‘very sweet’ to everyone but Scarlett Johansson was ‘a diva…lorded it around and made everyone’s life a nightmare’. Very interesting! Penshurst Place also has impressive gardens but unfortunately we visited on a depressingly grey and wet day so we didn’t really get to see them. I’ll go back in the summer, I think. 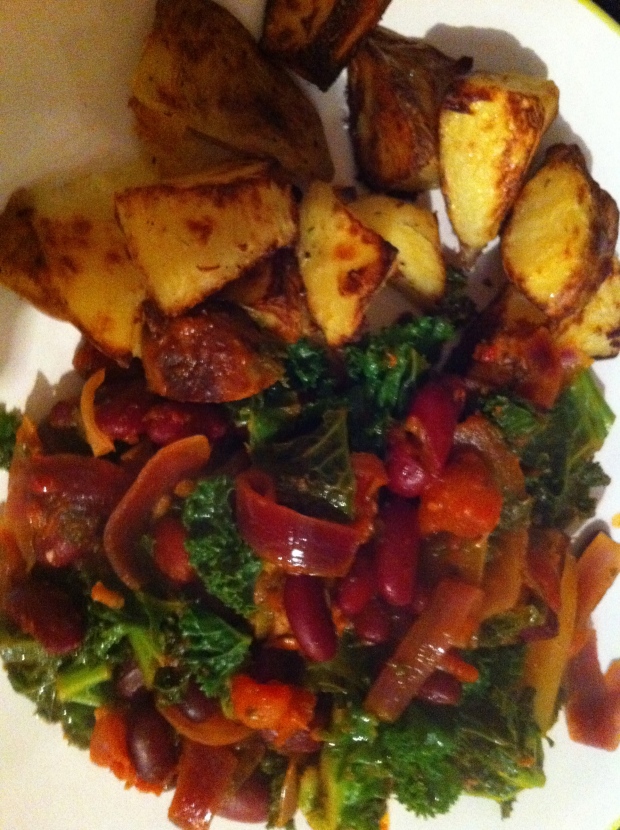 I have been doing my best to keep my new year’s resolutions going, and have done a lot of  random cooking of late. Last night I made up a dish that turned out to be very tasty; garlic roasted potatoes with a sort of vaguely Hungarian inspired sausage and kidney bean stew;  I made it from chopped tomatoes, mixed herbs, garlic, red onion, lots of chilli and tabasco, a can of red kidney beans, two chopped up pork sausages and some curly kale, as well as a dash each of red wine vinegar, balsamic vinegar and olive oil. It’s great for using up tins of stuff and especially good for when you’re poor as it’s very cheap to make!!

Reading wise, I’ve just started Paul Fussell’s The Great War and Modern Memory (thanks Charles!). It’s absolutely fascinating and I found my eyes pricking with tears on the tube tonight at some of the poetry quoted inside; I haven’t really read anything WWI related other than Vera Brittain’s terrific Testament of Youth, so this overview and analysis of WWI and its impact on literature and culture is proving to be a fantastic place to start. I’ve ordered a volume of WWI poetry, the complete Siegfried Sassoon memoirs and Robert Graves’ Goodbye to All That from amazon, so I’m looking forward to really immersing myself in the period over the next few weeks. I’m mainly doing this because…drumroll…I have a very important interview coming up. I have applied to a teacher training course, which would start in September, and enable me to become a qualified secondary school English teacher. I really want to make this career move; I am passionate about giving young people the best start in life, and teaching is something I’ve been wanting to do for several years, but I’ve needed to get to the point where I feel ready to settle down and put my all into my job. Part of the interview is proving I have the subject knowledge to teach across the curriculum from ages 11 to 18, and so I am frantically attempting to plug the gaps in my literary education before I get quizzed. I’ve only got a 1 in 5 chance of getting onto the course so it’s all very up in the air and the odds are rather stacked against me, but nothing ventured, nothing gained, and I’m going to give it everything I’ve got. If there are any teachers out there reading this, if you have any tips for me, please let me have them!! 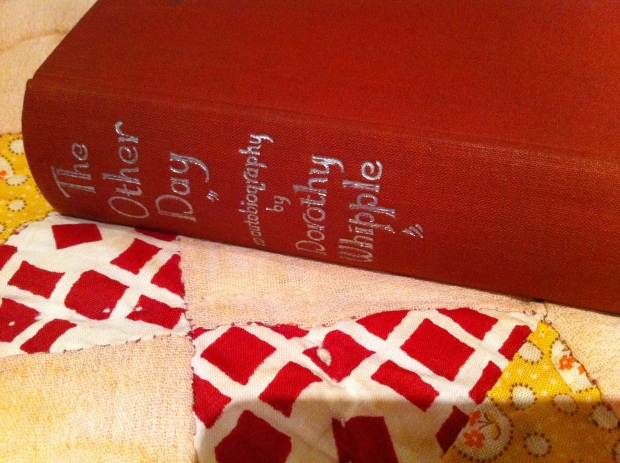 Finally, tonight I went to the bookshops on Charing Cross Road to see if I could find the WW1 books I ended up having to order from amazon. Any Amount of Books was having a pre-restock sale, and they had nothing but dregs left, which was rather annoying. Henry Pordes also had nothing, but there’s no surprise – they’re not my favourite shop, though the owner was actually polite to me this evening which makes a change! Finally I wearily made my way to Quintos, which hasn’t been good since they merged with another bookshop and moved down the street, in my opinion, and I was once again disappointed in my quest for WWI literature. However, just as I turned to leave, a magical name glinted in the corner of the basement room. Could it be….Dorothy Whipple??! Yes, it was! Not just any Dorothy either, but THE HOLY GRAIL – her autobiography, The Other Day, just sitting there, waiting for me. I haven’t seen a copy of it for less than £100 (though there’s currently a copy for £14.99 on amazon, get there quick!), and so I tentatively opened the cover to see the price, guessing that it would be unaffordable. It was £4! £4!!! I grabbed it, grinning like a lunatic, and ran to the till before anyone else could spot it. I then sat on the tube feeling smug all the way home. What a way to end a frustrating work day! I can’t WAIT to read it!