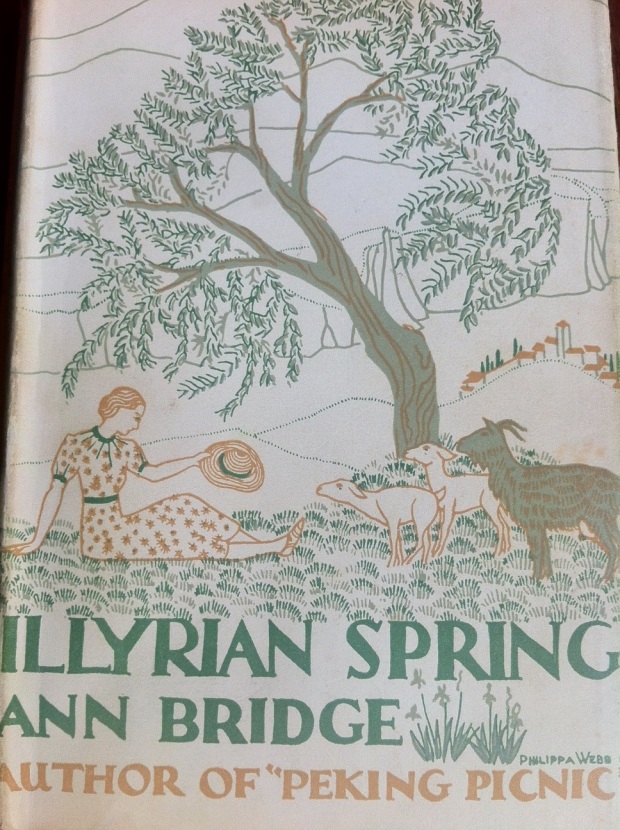 I read Illyrian Spring shortly after I started blogging three years ago, and I was absolutely enchanted by it. It instantly skyrocketed onto my favourites list, and I have been telling everyone how wonderful it is ever since. As such, I was nervous to re-read it. Sometimes, you read a book at a certain time in your life and it resonates with you deeply because of what you are going through at that particular moment. I first read Illyrian Spring during a period when I was feeling quite trapped in my life, and was desperate to escape everything that was holding me to where I was. So, when I read the story of Lady Grace Kilmichael and Nicholas Humphries escaping their respective families and the expectations and pressures of their everyday lives to rediscover themselves in new surroundings, I completely identified with their emotions and experiences and took the book’s message about finding personal freedom deeply to heart. I was worried that this more sentimental rather than intellectual connection with the novel might have coloured my impression, and made me see more literary merit in it than it actually carries. Happily, I needn’t have been; I found it just as wonderful as I did the first time around, and I am even more enthusiastic about passing on the joy of this novel to others.

The basic plot of the novel is fairly simple; it’s about two people, years apart in age and experience, meeting under similar circumstances and coming to discover themselves and the meaning of their lives over a month’s holiday on the stunning Dalmatian Coast.  The beautiful, forty something Lady Grace Kilmichael is the main character; she’s married to a famous economist, Sir Walter Kilmichael, who thinks she’s stupid, and has begun to spend a lot of time with another woman who is his intellectual equal. Also, her beloved daughter Linnet, a beautiful, leggy teenager, has recently started to be dismissive and cruel towards her, finding her too needy and clingy.  Fed up with feeling pushed to the side of her own life by the people she loves, Grace, who has found considerable commercial success as a painter, decides to take off on holiday to the Dalmation Coast to paint and rediscover herself.  On her journey she falls in with Nicholas, a young painter, who is escaping a similarly stifling home life and parents who don’t understand or appreciate him.  Their unlikely friendship blossoms amongst the beautiful scenery of the Dalmation Coast, and together they find the freedom to become the people they were meant to be.

Both Grace and Nicholas have been restricted and stifled by their lives and the people around them, and have ended up living lives that are unsatisfying and don’t reflect their true natures or dreams.  By leaving their everyday lives behind and escaping without anyone else’s knowledge to pastures new, they are free to discover what is really important to them, and are enabled to find the confidence they need to be the people they want to be in each other’s unconditional (and platonic) love for one another. Nicholas’ parents are opposed to him becoming a painter, and Nicholas has lost confidence in himself as a result; through careful, sensitive encouragement, Grace restores Nicholas’ self belief and gives him the strength to push for what he wants. At the same time, Nicholas’ adoration and ability to explain the struggles the young have with their parents gives Grace much needed perspective on her own behaviour and confidence in her own merits. Freed from the fears, anxieties and uncertainties that used to crowd their lives, Nicholas and Grace grow and change, and once again become able to face their lives and address the problems that led to them running away in the first place.

It’s not a perfect novel, by any means. It is rather dated, and is set in a world of unthinking privilege and perfection that is difficult to relate to. Grace and Nicholas both have plenty of money and can afford to wander around Croatia and Italy painting for weeks on end; both are prodigiously talented and attractive and intelligent (despite Lady Kilmichael claiming she is stupid, she isn’t – she speaks about five languages fluently and has an excellent grasp of world literature and politics), which does make their problems rather easier to solve. However, even so, their difficulties; to do with their relationships, emotions and personal dreams are universal. Taking their privilege out of the equation, it is still easy to relate and sympathise with these two, who have spent too long living their lives in boxes constructed of other peoples’ expectations.

Really, I think the novels that tend to be the greatest, and have the most profound effect on us as readers, tend not to be those with the most fantastic writing or wonderful plots, but those which teach us something and provide us with greater clarity into the circumstances of our own lives. Now I’m entering my late twenties, I am finding myself feeling more and more stressed and anxious about where my life is going. Many of my friends are marrying, buying homes, rapidly ascending the career ladder, and some are even starting to have children. I often feel hopelessly left behind, totally useless at adult life, and am convinced that I’ll never ‘catch up’ with my more successful and sorted friends. I’ve done nothing that I ‘should’ have done by this age, and when I am having particularly bleak, melodramatic ‘woe is me’ moments, I wonder really whether I have achieved anything at all in the past five years. But then I read passages like this:

and think yes, actually, feeling free and being happy as I am, no matter what circumstances I am living in, is the most important thing to gain in life, not a mortgage. So, once again, Illyrian Spring has given me perspective, and spoken to me in a way that is directly applicable to my own life. It’s a remarkable novel in the gently profound wisdom it contains, and it makes me wish I had known Ann Bridge and received her advice first hand.

Unfortunately Illyrian Spring is hard to find, as it’s currently out of print, though according to amazon, Daunt Books will be reprinting it next month – joy!! I didn’t know Daunt Books had their own press, and I’m excited to see the edition they produce. When it comes out, I expect you all to pounce on it!! I was lucky to find my original edition with beautiful dustjacket for £2.50 in a random charity shop shortly after I first read it in a grubby paperback edition – I choose to believe that this unexpected find was a sign from the ether that Illyrian Spring is going to be a book I will treasure throughout all the stages of my life and therefore I need a lovely copy to enjoy staring at on my shelf. I hope many of you will go on to find the same pleasure and inspiration in it as I have.

p.s. I will start my re-read of Pride and Prejudice next week, so if you want to join in on the discussion, you need to pick up those copies and get going!!