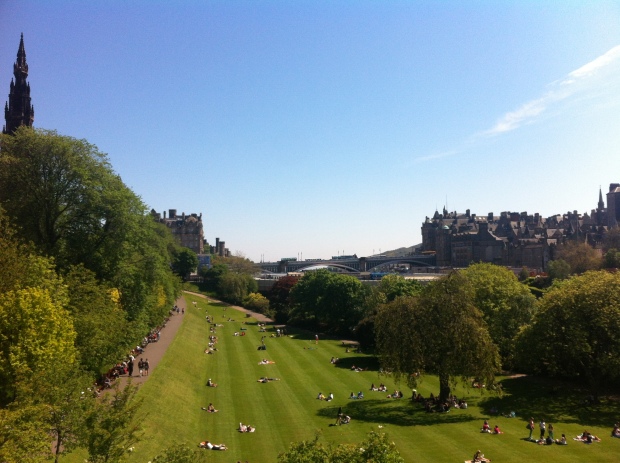 The final two days of my trip to Scotland were spent in lovely Edinburgh. We walked out of the station to find ourselves basking in warm sunshine and being serenaded by a busking bagpiper; what could be more perfect?! After dumping our bags at our nearby hotel, we set off to explore. I was instantly taken aback by how pretty and uniform the Georgian New Town is; the streets are wide, the buildings are lofty and elegant, built of sandstone and generously proportioned. It’s impossible to feel hemmed in here, and it hardly seemed like I was on the streets of a capital city at all! Walking over the bridge across the railway line, I marvelled at the view of the lovely Princes’ Gardens, an oasis of greenery filled with fragrant flowers. Turning around, I gasped at the unexpected view of the ancient castle, perched high up on a ridge overlooking the city. Everywhere I looked, I was confronted with gorgeousness; and yet there was even more to come!

Running up the Playfair Steps that take you up from the Gardens to The Mound, which I think I’m right in saying is in the Old Town, we found ourselves walking up a steep hill and then wandering onto the Royal Mile, which is a collection of streets that makes up the just over a mile stretch between the Castle and Holyrood Palace. The architecture here is drastically different to that of the New Town; there is a real hotchpotch of buildings from all different periods and lots of little alleyways, flights of steps and courtyards that run off the main road, which give the Old Town a labyrinthine quality that reminded me of Miss Brodie leading her girls through the dank and frightening streets of this part of the city in The Prime of Miss Jean Brodie. History is everywhere you look and I was especially delighted with the brightly coloured Victoria Street, which has two levels, something I have never seen before. At the end of Victoria Street is the Grassmarket, a wide square that used to host the market in the old days. Now it is full of restaurants and cafes and I was pleased to see not a chain establishment in sight. This is something that struck me particularly; while the usual high street chains are represented, there is a high proportion of independent shops and restaurants which gives the city a very quirky appeal.

After a spot of lunch sitting out in the sunshine – what a treat! – and a look around the shops, we popped into the lovely St Giles’ Cathedral to look at the gorgeous stained glass and the National Trust property, Gladstone’s Land, which is a 17th century tenement building and offers a fascinating insight into life over several centuries in the city. The guide told me that in the 1930s this whole area – right outside the castle, no less! – used to be a slum, and this amazing historical building that still has its original 1600s painted decorations on the walls was almost knocked down as it was not fit for habitation. We then walked up to the Castle to have a look at the preparations for the world famous Military Tattoo, but we didn’t fancy looking around inside as it was such a sunny day. Instead, we walked all the way down the Royal Mile to Holyrood Palace, which sits directly beneath the extinct volcano that forms the strikingly beautiful Holyrood Park, the highest point of which is the famous Arthur’s Seat. Despite knowing that Holyrood Park existed, I was still overwhelmed by coming across this amazing natural wonder at the edge of the city – I have never seen anything like it! It was like wandering off Oxford Street and having a mountain appear before me – totally unbelievable! We had a brief sit down before starting the ascent to the top, though the heat and unsuitable shoes meant that we didn’t quite make it all the way to Arthur’s Seat. No matter – the views were still incredible and we were so lucky to have such good weather to enable us to see for miles. Once we’d had our fill of the view, we descended, gazelle like, down the very steep hillside, conveniently finding ourselves at the door of Holyrood Palace’s very smart tearooms once we had reached level ground once more. We sat outside and had tea and some very good shortbread in the sunshine, amusing ourselves greatly by watching the enthusiasm of several tourists who had bought rather garish tartan berets from the gift shop and were wearing them with sincere pride.

Exhausted, we wandered back to the New Town to look around the shops and have a much needed lie down in our hotel room, before getting ready for dinner and an early night. Sadly we woke up the next day to grey skies and drizzle; back to normal! We would need to have a largely indoors day, so after a lovely breakfast in Pret, we went to look in some of the fancy shops down George Street. My personal favourite, Anthropologie, was beautifully designed with an indoor garden and some wonderful art, which made the pain of not being able to afford anything much easier to bear. We then looked in the amazing Anta, which sells handmade Scottish designer clothes, furniture and homewares, all of which have a distinctively Scottish feel, either being made of tartan fabric or featuring Scottish emblems. As I always do in shops which are way out of my price range, I fell in love with everything and started imagining a home filled with tweed rugs, tartan throws and handpainted ceramics, but I was doomed to leave with nothing. Those of you with bigger wallets should take a look at the shop though, it’s online here. Such beautiful things!

We soon tired of being drizzled on, so around midday we headed for the Scottish National Gallery. I knew one of my favourite paintings, John Singer Sargent’s Lady Agnew, was displayed inside, and I was delighted to come across it on the second floor. Alongside that, there were a range of beautiful 19th century paintings, including some wonderful Impressionists, as well as plenty of Scottish artists who I hadn’t heard of before. There did seem to be a particular emphasis on Dutch art from the 17th and 18th centuries, though, which isn’t really my cup of tea, so we didn’t stay in the Gallery too long. Instead we zipped over to the other side of town to go to the National Museum of Scotland, which is wonderful as it’s a sort of combination of art and design, science and natural history, so there’s something for everyone. It’s in a lovely building and has so many interesting sections, though we mainly went to see the exhibition on Scottish Railway Posters, which was sadly quite small but fascinating nonetheless. In the Victorian period, the Queen’s love of Scotland triggered a vogue for holiday travel north of the border. The expanding railway network made it increasingly easy, quick and inexpensive for people to make the journey from England’s major cities and the railway companies wasted no time in producing a range of posters to advertise Scotland’s natural beauty. The posters produced in the 30’s are particularly lovely, featuring a land of green, snow capped mountains and gently meandering rivers that look simply irresistible. I was sold!

Once we’d finished looking around, we went back to the National Gallery to have lunch in their delicious restaurant, which is part of the ‘Slow Food’ movement and only serves organic food sourced from Scotland. It also happened to be furnished in Anta furniture and fabrics, so I was in heaven from the minute we walked in! We spent a very happy and relaxed two hours eating divine cauliflower and walnut soup, homemade bread, amazing crunchy chips and homebaked lemon cake, washed down with Scottish blend tea (no idea what made it Scottish, but it was lovely!), all while looking over Princes’ Gardens. The sun might have gone, but the view was still very pretty and I didn’t want to leave at all. However, time ticked on and the hour of our departure back to London loomed. With great regret I bid goodbye to this beautiful, calm and atmospheric city that has so much to delight in at every corner. In fact, I was so enchanted by it that I am seriously considering a move in the future. City life, but at a slower pace and with access to the sea and countryside within minutes of leaving the shops, restaurants, museums and theatres behind? Sounds pretty perfect to me!