This weekend one of my dearest friends came to visit, all the way from Washington D.C. Emily and I met at university when she was on her Junior Year Abroad from the amazingly beautiful Mount Holyoke College in Massachusetts (which I later visited), and we soon bonded over our ridiculous sense of humour and mutual love of literature, book shops and drinking too much cheap wine. Our friendship has had to be long distance since we were 20, and we only really see each other about once a year thanks to the considerable expense of flying across the Atlantic. When I was living in New York I saw her every couple of months, which was wonderful, but it’s now been exactly a year since I last saw her, so picking her up from the station on Friday was an occasion of much jumping and hugging and laughing and talking excitedly over one another with big silly grins on our faces.

Emily is obsessed with Virginia Woolf and Vita Sackville-West, so it’s very handy that I now live in the same town as Vita Sackville-West’s childhood home, Knole, and a fairly short drive from Sissinghurst, her adult home that she shared with her husband and children and where she created her famous gardens. On Saturday morning the sun was shining and the sky was a glorious blue, and so we set off to explore Sissinghurst, which I have been meaning to visit for years. The drive out there took us through miles of winding country lanes offering glorious views across the landscape and glimpses of a range of lovely traditional, historic villages. After about forty minutes we arrived at Sissinghurst, the tower of which we spotted when we were still a few minutes away. It is a truly magnificent place that took my breath away. A partly ruined red brick castle largely built in the 18th century, it is situated in the middle of acres and acres of unspoiled, rolling countryside and surrounded by beautiful formal gardens. You can climb all the way to the top of the central tower and take in the incredible views that reveal the beauty of Kent, as well as being able to stop in several of the tower rooms as you ascend to read of the Castle’s history as a prison for 3,000 French soldiers in the 18th century – you can still touch the graffiti they scored into the walls – and poke your head into Vita’s private study that is in the exact layout she left it in. 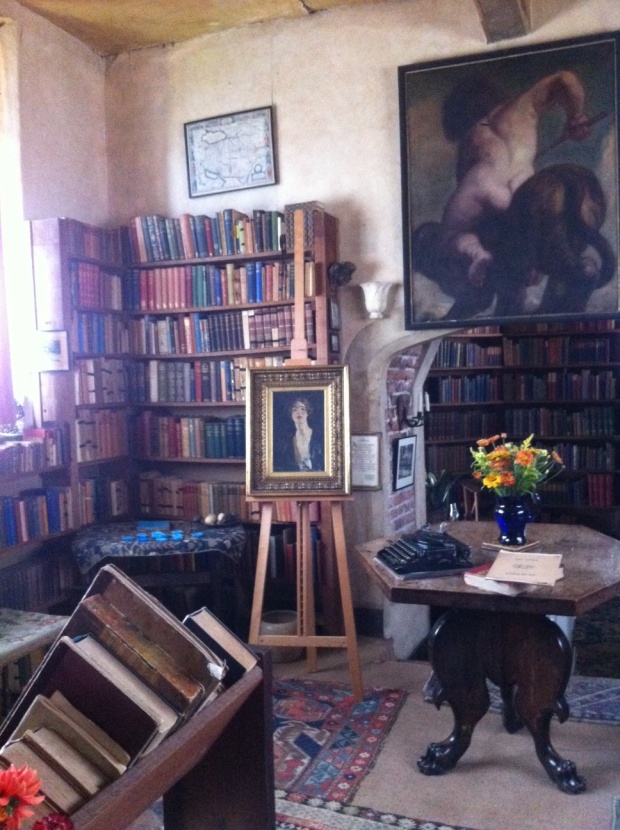 Either side of the tower are two wings, one of which houses Vita and Harold Nicolson’s study. A gloriously cosy, long room with a huge fireplace, it has several lovely relics from Knole displayed in it, the famous de Laszlo portrait of Vita as a teenager, and bookshelves aplenty. I managed to spot quite a few of my favourites; The Diary of a Provincial Lady, Enid Bagnold’s The Squire, F M Mayor’s The Rector’s Daughter, Rebecca West’s The Return of the Soldier…I think she would have been a fan of Virago press if she was alive today. We could have stayed in there browsing the shelves for hours, but the gardens and the sunshine beckoned. We wandered through the lovely rose garden and courtyards, before stopping for a picnic lunch on the lawn at the front of the house, where we had a lovely view of the Castle’s old oast houses and barns. After lunch, we went for a walk around the estate, enjoying the views across the fields and exploring the vegetable garden that the National Trust has planted. We then popped into the barn to see what was in there, and good job we did, because inside is the genuine HOGARTH PRESS. Yes, sitting in the middle of an old barn is the original printing press Virginia and Leonard Woolf used to print their books. We were in raptures! What a find! I think it says quite a lot, however, that no one else was in the barn and that there was no signage pointing people to the press; perhaps the Woolfs are no longer well known enough amongst the general populace to warrant special attention?

After spending a good few hours at the castle, we got back in the car for the return journey, taking a slightly different route so that Emily could see a little more of the surrounding area. As we passed through an idyllically beautiful village, we saw a lovely church with a sign ‘Tower open’ propped outside the front. Never ones to miss an opportunity for an adventure, we parked up and headed in. We paid our £2 and then climbed up a very steep, winding stone staircase to the castellated tower of this 19th century church that offered breathtakingly lovely views across the Weald of Kent, with its wooded hills, patchwork fields and huddles of clay rooved and thatched  cottages. With the help of binoculars, we could even see the tower of Sissinghurst peeking above the trees. Perfect!

Not content with one day of Vita, today we headed off to Knole after eating a good old fashioned British fry up. I haven’t been in the house for a long while, and it is currently in the process of being renovated and much adapted to both make much needed repairs to the fabric of the house and provide increased access and interpretation for visitors. This offered a fantastic new perspective, especially as there is a brand new visitor centre that does a much better job of explaining the history and significance of the house before you go in for a tour. Knole is one of Britain’s oldest and most impressive stately homes, situated in one of the last remaining ancient royal deer parks. Originally built for the Archbishop of Canterbury in the 15th century, it has been in the hands of the Sackville, later Sackville-West family, for over 400 years. As the Sackvilles were consistently popular and influential members of the court throughout their history, Knole has a huge collection of royal furniture and could be a museum in its own right. With 365 rooms and 52 staircases, it is a calendar house and a veritable rabbit warren; it positively oozes history and every room has something to surprise and delight. In the main entrance hall is the manuscript of Orlando, Virginia Woolf’s novel inspired by her love affair with Vita Sackville-West, who grew up at Knole and loved it with a passion. She was devastated when the house was passed to a male relative on her father’s death, and apparently never got over the loss of the remarkable, beautiful, ancient, labyrinthine house that had inspired her imagination from a very young age. Today only half of the house is lived in by the Sackville-Wests; the whole estate was left to the National Trust in the 1940s and can be enjoyed by everyone. I have a feeling that Vita would have hated that, but nonetheless, it was a magical experience for us to get to walk through the rooms, look into the eyes of illustrious men and women long dead, marvel at the intricate decorations, lavish tapestries, plush furniture and glinting silver and soak up the atmosphere of a house that has harboured men and women who have made British history since the reign of the Tudors. I highly recommend it for a visit; unlike Sissinghurst, it’s very easy to access as it’s only a twenty minute walk from Sevenoaks station, which is half an hour from London.

After two days of Vita, I now want to read more of her work. I’ve just ordered a copy of The Heir and will be looking forward to getting stuck in when it arrives. If anyone hasn’t read any Vita, I highly recommend All Passion Spent; it’s a truly beautiful novel that has just been republished in a very nice new edition. And, if you’ve been intrigued by Knole, her also very excellent novel The Edwardians is set there.