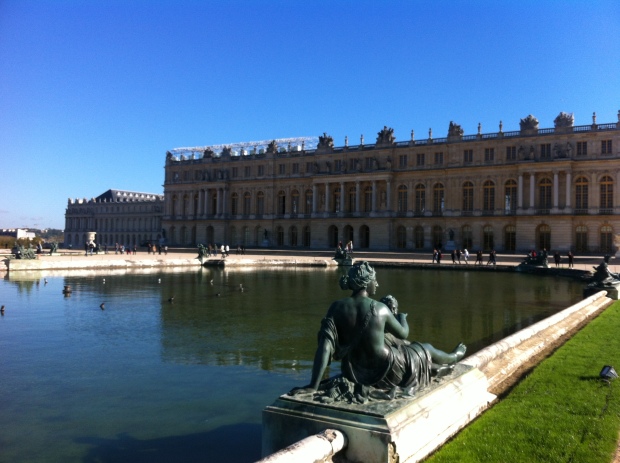 During my first trip to Paris earlier this year, I didn’t have time to visit Versailles, which I was really disappointed about, so this time I made it my first priority. I have always been fascinated by Marie Antoinette and the decadence of the French royals, so well epitomised by their lavish, sprawling estate on the outskirts of the capital. I remember learning about the French Revolution at school, and seeing grainy black and white photographs in my history textbook of the chateau and Marie Antoinette’s Petit Trianon, classic examples of the Royal couple’s lack of understanding of the realities of life for the majority of their subjects. I couldn’t believe that it was all still standing and I promised myself that one day I would go, and walk in the footsteps of the court of Louis XVI. It’s only taken me about fourteen years to follow up on my promise to myself, but better late than never! 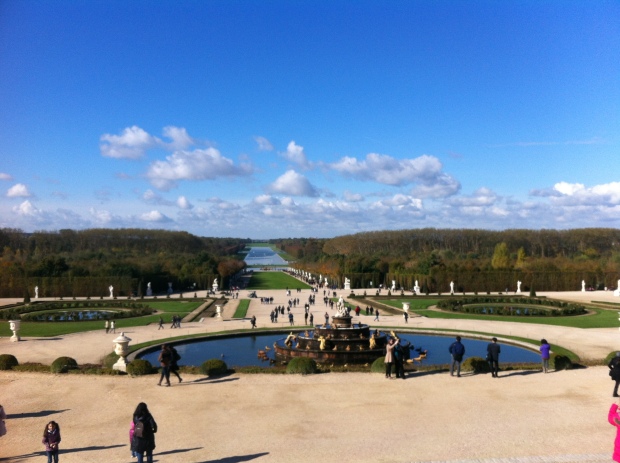 Versailles is a very easy trip; it takes about 25 minutes on the double decker (I love double decker trains!!) RER train from central Paris. I was amazed to leave the station, walk out onto a very average looking suburban street, complete with a Starbucks, turn a corner and then see the Chateau de Versailles – THE Chateau de Versailles – just sitting right there in front of me! The main building is colossal, and breathtaking; the sheer scale of it is almost ridiculous, and I certainly wouldn’t want to be the window cleaner! It is a veritable wedding cake of a palace; every surface is decorated in some way, with the maxim of ‘more is more’ definitely being the driving force behind the design. Carving, gilding, marble, balustrades, columns, clocks, statues, wrought iron….it’s all here, and it’s all beautiful. However, the best is definitely not what can be seen from the street; the real beauty, in my opinion, is all in the gardens. 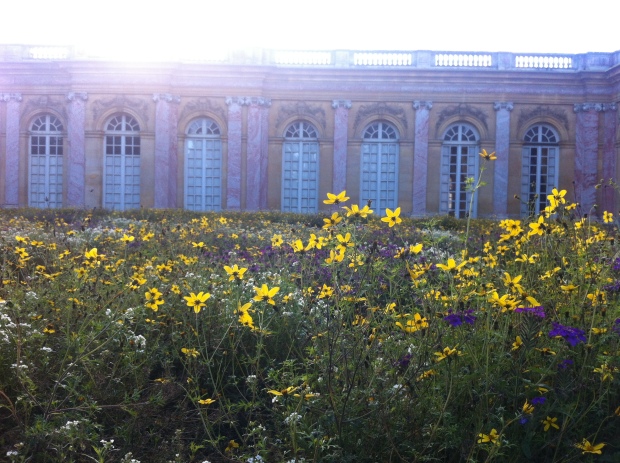 After queuing up for our tickets, we headed straight to the gardens, thanks to the enormous second queue to enter the Chateau (I highly recommend doing the gardens and Trianon first, as this way you’ll be avoiding the main crowds, who tend to do the Chateau first and the gardens later). I actually gasped when we walked around the side of the main building and I got my first glimpse of the pleasure ground of the French monarchs; as far as the eye can see, beauty unfolds. Amber coloured woodland is bordered by neatly trimmed hedges, that themselves border perfectly straight gravel paths that skirt around pools of water from which emerge incredible statues squirting water high into the sky. From the Chateau, it looks like the gardens go on forever; to explore every nook and cranny would surely take years. On the day we were visiting, there was a special garden show, meaning that period music was playing in the background and that the fountains were turned on. It really helped to create the right atmosphere, and we were enchanted by the feeling that we were in our own 18th century movie as we wended our way down through the golden woodland to Marie Antoinette’s playground.

The Grand and Petit Trianons are interesting buildings, but for people used to being able to traipse through the often elaborate and richly furnished stately homes of the British aristocracy of a weekend, we weren’t particularly struck by their opulence. Obviously much of the original furnishings have now gone, and I certainly didn’t feel like I could understand the reality of everyday life for Marie Antoinette and her circle by looking at what remains. However, where this area truly comes into its own is in the Hamlet and Farm Marie Antoinette constructed to apparently create more of an illusion of being deep in the countryside and far from the oppressive and judgemental court at the main Chateau. I was surprised to find out that she actually used the buildings, and had rooms in them; also, that there was a real farmer who ran the farm and provided the Queen with foodstuffs. It is an absolutely idyllic spot, with the Disneyland-esque cottages arranged around a millpond with its own watermill. Each cottage has a fenced in garden, and they are all wonderfully stereotypical visions of what a chocolate box cottage in the countryside should look like. All around are fields where farm animals roam freely, along with extensive woodland, meaning that you really can forget that you are essentially at the bottom of the main Chateau’s garden! I honestly have never seen such a gorgeous sight as that of the lovely cottages all clustered round the millpond, framed by autumnal trees. I could well imagine Marie Antoinette wandering about here, playing the country maid, delighting in her freedom, and yet the rather idealistic design of the cottages clearly reveals her lack of understanding of what provincial life was like for the average peasant of the time.

After a good couple of hours of exploring the grounds, we headed back to the Chateau. Thankfully the queue to enter was much reduced, and we breezed on through and into the main suite of rooms that are open to the public. It is all very opulent and beautiful but if I’m honest, I found it rather an anticlimax. I loved the Hall of Mirrors and the views out into the garden, but the sheer number of people crowded into the rooms and the lack of many original fixtures made it very difficult to imagine the life led by the French court, and very little attempt was made to help visitors recreate the right impression. Much of what is there now dates from the time of Napoleon rather than Louis XV and XVI, and I’ve seen more furniture from Versailles in British stately homes than I did at Versailles itself. I know that everything was scattered or destroyed after the revolution and I wasn’t expecting a faithful recreation of the court of the Sun King, but even so, I felt the rooms were displayed with very little imagination or sensitivity. There was no atmosphere, no heart; just a clinical succession of rooms filled with crowds of camera clicking tourists. If I was in charge, I’d do things very differently. Playing period music would be a start, along with attempting to recreate original room layouts, even if I had to use reproduction furniture. I’m prepared to be corrected, but I doubt many people go to Versailles to see how Napoleon and subsequent French governments furnished the place. Versailles is famous for the Louis dynasty and Marie Antoinette, and I would have liked to have seen some acknowledgement of that in the rooms that are open to the public. 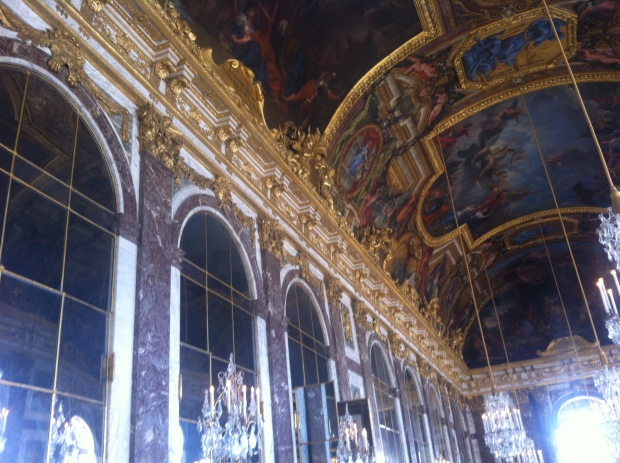 One thing inside the Chateau that did get top marks from me, however, was the Cafe Angelina on the top floor. Discovering Cafe Angelina’s famous chocolat chaud last time I was in Paris was a genuine trip highlight for me, and the very idea of being able to sup the most divine molten chocolate drink known to man while sitting inside a room once used by Marie Antoinette was frankly irresistible. We had a marvellous time eating a delicious millefeuille and drinking our hot chocolate while staring out at the gorgeous gardens, and despite our reservations about the Chateau’s interior, we both agreed that it had been a simply wonderful day. Most excitingly, we still had three more days at our disposal in which to explore Paris – more on that is to come!