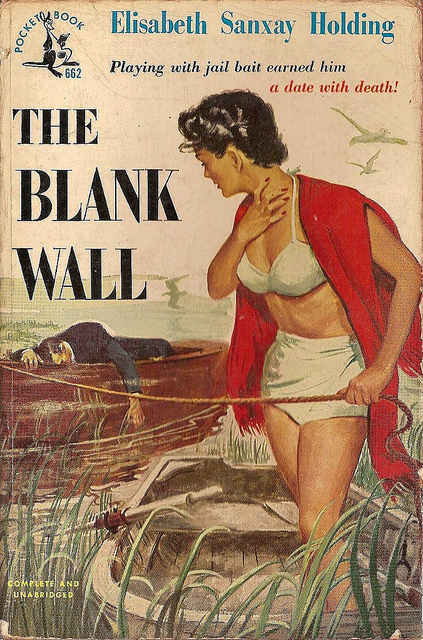 What lengths will an ordinary housewife go to in order to protect her family? Elisabeth Sanxay Holding brilliantly explores just this question in The Blank Wall, a gripping thriller that had me sitting up in bed until the wee small hours. Lucia Holley is a New York housewife, transplanted to the countryside for the duration of the war. Her much loved husband is away fighting, and she shares their lakeside home with her elderly British father and two teenaged children, Bee and David. As the novel opens, Lucia is worried about Bee; she has started going to Art School in the city, and has been fraternising with an undesirable older man, Ted Darby. Bee is deaf to Lucia’s protests, dismissing her as a clueless housewife with no understanding of the real world. However, Lucia is proved right when she predicts Ted will be nothing but trouble; when he turns up at their boathouse late one night, her father goes out to see him off the premises. In the morning, Lucia goes out to the lake to find Ted dead in her motorboat; when her father gave him a shove into the water, he didn’t realise that he’d pushed him directly onto an upended anchor. Lucia is horrified, but anxious to protect her father and daughter, she realises she must take action. She sets off in the boat to hide the body on a nearby sandbank, but little does she know what consequences her involvement will have…

Sanxay Holding is brilliant at ramping up the tension, and with every chapter the threats increase. Ted Darby’s associates turn up, with material to blackmail Lucia. The local Lieutenant finds some incriminating evidence that puts him on her scent. From being a perfectly ordinary suburban housewife, Lucia suddenly becomes plunged into a world of secrets and vice, fear and danger. Her focus throughout, however, is not how to save her own neck, but those of her family. She is motivated by protecting her adored father from the knowledge of his bloodied hands, and her beloved daughter from having to admit the indiscretions she has indulged in with such an undesirable man. There is nothing she won’t do to avoid them experiencing pain; nothing she won’t do to ensure their lives remain happy, safe and comfortable.

While the major plot of the novel surrounds Lucia’s attempts to cover up Ted’s death and her subsequent actions, there is also much in here about Lucia’s life as a wife and mother. Married when barely out of school, Lucia has never had to cope on her own. Her world has consisted solely of the domestic sphere; bringing up children, organising meals, changing beds, shopping for groceries. She is assisted in this by her loyal maid Sibyl, who covers up the fact that Lucia is actually not very good at any of these tasks. Lucia sees herself as absent minded and ineffectual, and as her children grow up, they begin to dismiss her as both infantile and a disappointment. David treats his mother like a child who needs looking after; Bee considers Lucia’s life to have been nothing but a waste. However, with her husband gone, her father grown feeble, and her daughter needing her protection, Lucia is forced to dig deep within herself to find the qualities she has always believed she lacked. Rather than crumbling under the strain, she thrives. With the help of the steely Sibyl, Lucia finds the courage and resourcefulness she has never had the opportunity to use before. These two women, normally hidden from view, come into their own as events progress, and demonstrate to the family that they are not the passive creatures they have always appeared to be.

I loved The Blank Wall‘s complexity in working on so many different levels. I found it a powerfully feminist novel that gives a brilliant insight into mid century American life, as well as being a fantastic work of suspense. Lucia is a character who surprises everyone throughout the novel, including herself. Her relationship with Sibyl in particular is very interesting; they trust in and rely on one another implicitly. Lucia’s love of Sibyl and disdain of the racism she experiences reminds us of the political context of the novel, as well as underlining that Lucia is not all she seems. Bee thinks Lucia has no awareness of real life, but she has plenty; she can smell Ted Darby’s rotten odour from a mile off, and instinctively knows that she can trust his associate Marty, who turns up soon afterwards to stir up trouble. Their relationship is also intriguing; Marty’s reaction to Lucia reminds us that she is still a young and very attractive woman, desired and desiring. Bee and David are disturbed by Marty because they reveal their mother to them in a whole new light, and force them to realise that they don’t really know her at all. For Lucia has never really had the chance to find out who she is, or what she is capable of. In a way, covering up a death gives Lucia a new life. But will she be free to live it? You’ll have to read this brilliant novel to find out!