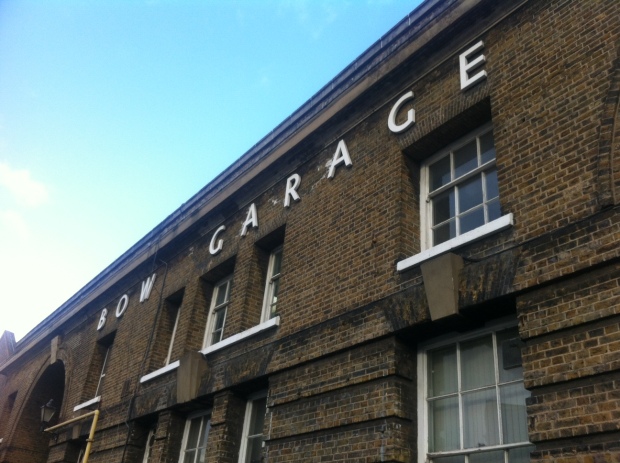 I love it when friends move flats. It means I get to explore new areas of London that I’d probably never visit otherwise. My intrepid university friend Emma has done a lot of moving since we left our student digs in the summer of 2007 (it seems so long ago!) and now she’s settled in Bow, East London. It’s not my favourite part of town, I must admit, but I was keen to go exploring when I visited last weekend. When I got off at the station, I was initially underwhelmed; the main road was grubby, run down and generally very unappealing. I thought it was certainly not somewhere I should like to live. However, as I turned into Emma’s road, everything changed. Instead of dilapidation and dirt was a row of pale yellow brick Georgian terraces with beautiful wrought iron railings smartly separating their courtyard gardens from the pavement. It couldn’t have been a more incongruous sight if it tried. Inside Emma’s lovely house, it was an oasis of calm, and I was shocked to find a very peaceful back garden with barely any noise to be heard apart from the chimes from nearby Bow Church. Little did I know that this was going to be just the beginning of a day full of surprises! 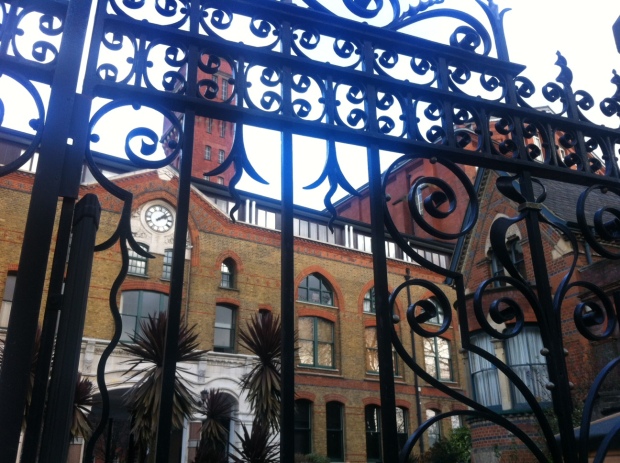 After lunch and chatting, Emma decided she needed to go to the garden centre to get a bird feeder (she grew up on a farm). I laughed. A garden centre? In Bow? Surely not! I cried. Just you wait and see! replied Emma, and off we went. We walked down her street, past the Regency terraces towards a lovely Victorian railway arch. Behind the arch was a huge Victorian bus garage with some brilliant art deco signage – another pleasant architectural surprise. Then we walked past a cluster of Victorian buildings that looked vaguely industrial. We pressed our noses up against the wrought iron gates and craned our necks to look inside. It reminded me of a seminary I had found while wandering in downtown Manhattan one day. What had been its original purpose, I wondered? Later research revealed that it was originally the Bryant and May match factory, once London’s largest and scene of the famous Match Girls strike. I’d love to be able to go inside and explore! As we wandered further on towards Roman Road market, I suddenly stopped and gasped. At the end of a side street, I had a clear view of the Olympic stadium and the hideous Anish Kapoor sculpture. I couldn’t believe it! We were within spitting distance of the Olympic Park! What more was East London going to offer me?!

So much more, as I was about to find out. Victorian East London began to make way for the large council estates of the 1960s, and while a lot of these buildings are incredibly ugly, there was something quite striking about the stark modernism of these high rise flats. Many of the residents now have a view of the Olympic Park, as well as the massive expanse of beautiful Victoria Park, which we soon found ourselves wandering into. At the edge, on a former patch of wasteland, was the garden centre. Called Growing Concerns, it was built and is staffed by local residents, and includes a lovely coffee stand with an honesty box. It is a gorgeous little oasis, filled with colour even in the depths of winter, and a fantastic example of what local communities can achieve when they work together. I am no gardener, but even I felt inspired! Even better was realising, when I wandered down some steps and through an arch, that I was on the bank of a canal complete with narrowboats. I was beginning to feel like I didn’t know my home city at all! 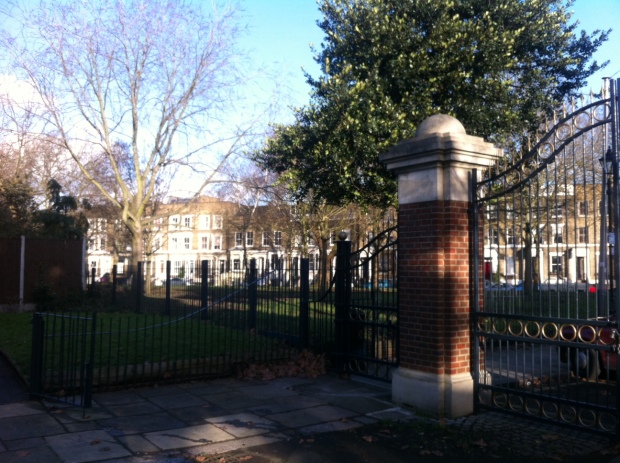 After Emma had bought her bird feeder, we went into the park for a walk. I loved the fact that on one side of the park was a council estate, and on the other was a crescent of large Victorian townhouses that wouldn’t have looked out of place in a smart street in Chelsea. We were also walking alongside a canal that was bordered by old warehouse buildings, now smart new flats, with the struts of the Olympic stadium’s roof jutting above the horizon in the distance. What could be more representative of London’s diversity, history and ever regenerating landscape? I was entranced. I’m so used to dismissing East London as either a bit of a dump or a hive of hipsters that I’ve never really given it a chance. I feel like the scales have fallen from my eyes, and I can’t wait to do some more exploring in future! 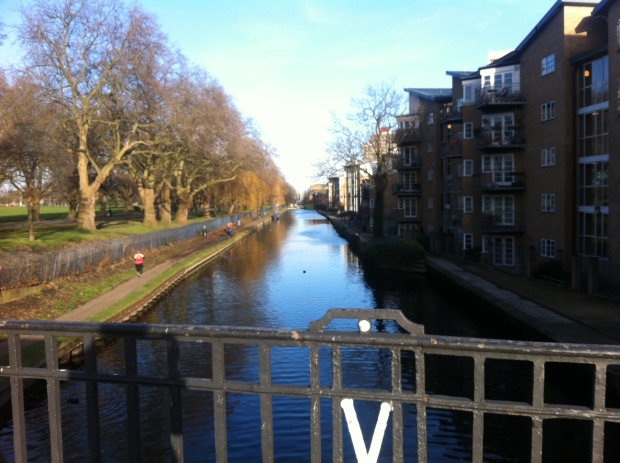