My trip to the Sussex Downs during the Easter holidays already feels impossibly distant, but the memories of the quietly beautiful landscape have remained vivid and continue to inspire. There is something primal about the gently undulating hills and bleached, chalky soil; despite their close proximity to a number of bustling towns and cities, they are remarkably untouched by modernity. The scenes that Eric Ravilious captured in his quintessentially British watercolours of this area are still instantly recognisable today. No housing estates or motorways have sullied these peaks; they are an unchanged link to Ancient Britain, whose marks remain etched into the chalk face. 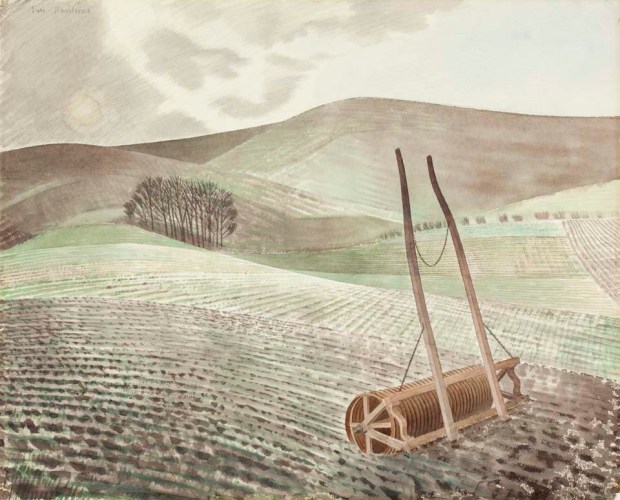 We stayed in the small village of Firle, which Ravilious often stayed on the outskirts of with his friend Peggy Angus. Her cottage, Furlongs, was frequently host to raucous parties of bohemian artists coming to descend for the weekend, roughing the spartan conditions with typical bonhomie. We were delighted at the thought that Ravilious probably drank at the pub we stayed in, and came into the village to use the post office and village shop, which Virginia Woolf also would have done when she rented Little Talland House on the main street in 1911. Ravilious painted many pictures of Furlongs and its surroundings, but I had no idea of where it was, and in the snowy, freezing conditions we endured during our trip, it wasn’t exactly the weather to go roaming across the Downs to find it.

Thank goodness for Donna; she had done her research, and was sure she could direct us to the right place. So, we jumped in the car and drove a short way outside of the village before branching off down a tiny lane. In the distance we saw a little flint cottage, but the track leading up to it was marked ‘Private’. Had I been alone, I would have hesitated, but with strength in numbers, we were determined to press on. Imagine our joy when we reached the top of the lane and found Furlongs, unchanged! It was somehow even more special to find Furlongs than it was to see Charleston; the unexpectedness of it, its lonely position and its surprising familiarity were strangely touching. It was quite the pilgrimage.