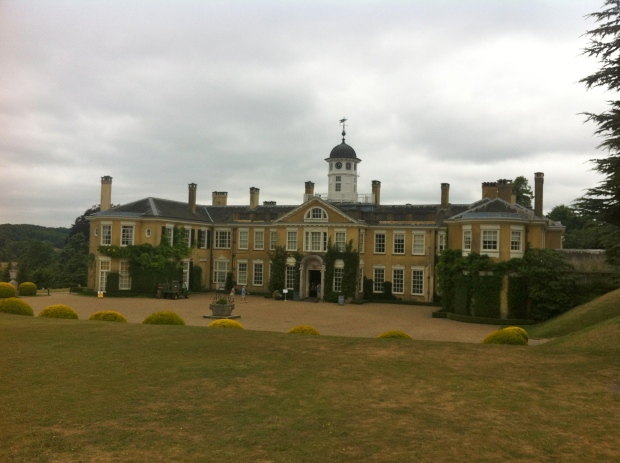 I had hoped to visit Hastings this past weekend, but rather typically, the one iffy day we had weather wise was on Saturday, when my university friend Emma had planned to come up from London and go to the seaside with me. Undaunted, we flicked through the pages of my National Trust guidebook and decided to pop over the county border to Surrey for the day, taking in an Edwardian mansion and a famous beauty spot featured in one of my favourite novels. 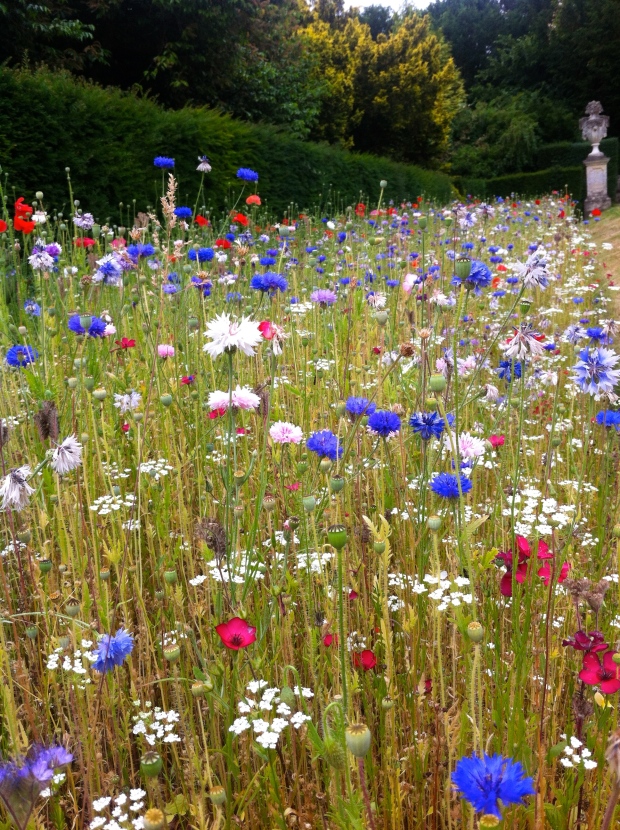 Our first port of call was Polesden Lacey, a picturesque mansion set amidst the Surrey Hills just outside of Dorking. It was extensively remodelled in the late 19th and early 20th centuries from an earlier house, and its last owner was Mrs Margaret Greville, a famous Edwardian hostess. Despite being born illegitimate on the back streets of Glasgow, she grew up to become an intimate of royalty and the wife of an aristocrat. The Queen’s parents spent part of their honeymoon at Polesden Lacey, and it was soon evident as to why they would have chosen such a spot. The house is exquisite inside, with a series of beautifully decorated rooms that manage to both be wonderfully palatial and comfortably cosy. The internal phone lines meant that guests could contact servants at the lift of a receiver, communicating exactly what they wanted and having it brought to them in minutes. The bathroom sinks are made of silver, the hallways are hung with what was then some of the most valuable art in a private collection, and every room has glorious views either across the surrounding countryside or onto the beautiful gardens. Mixing the comforts of the highest end hotels with the cosiness of a home meant that Mrs Greville never lacked house guests, and as she was widowed shortly after moving into Polesden Lacey and never had children, she thoroughly enjoyed always having the house alive with laughter and conversation. 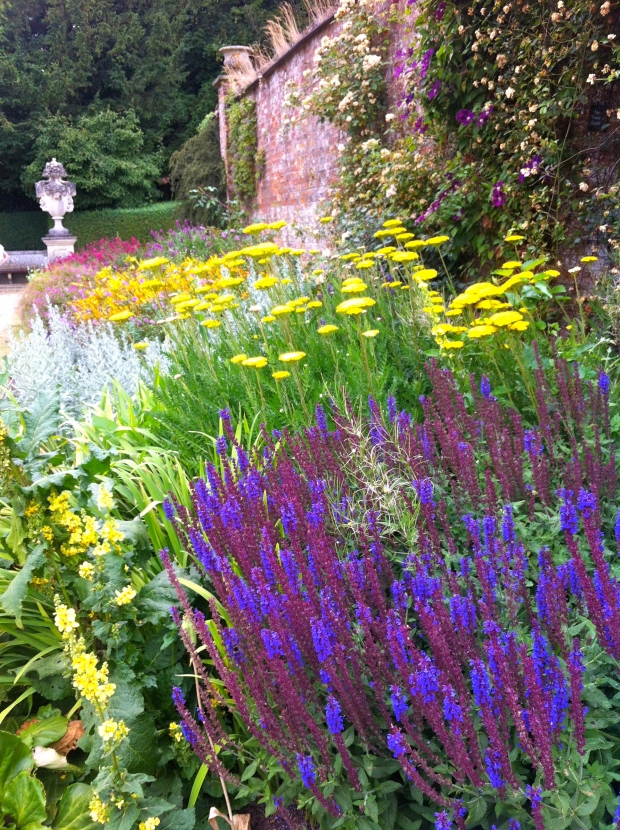 The house is set in absolutely delightful gardens, which have amazing views across the hills that undulate from the steeply sloping lawns into the far distance. Formal lawns give way to colourful wildflower meadows, a walled rose garden creates wonderful fragrances and rambling vines trail across the Italian-looking terrace at the back of the house. I could just imagine the ladies in white tea gowns strolling along the gravel paths and picnicking on the lawn. To have been a guest here must have been quite the experience. 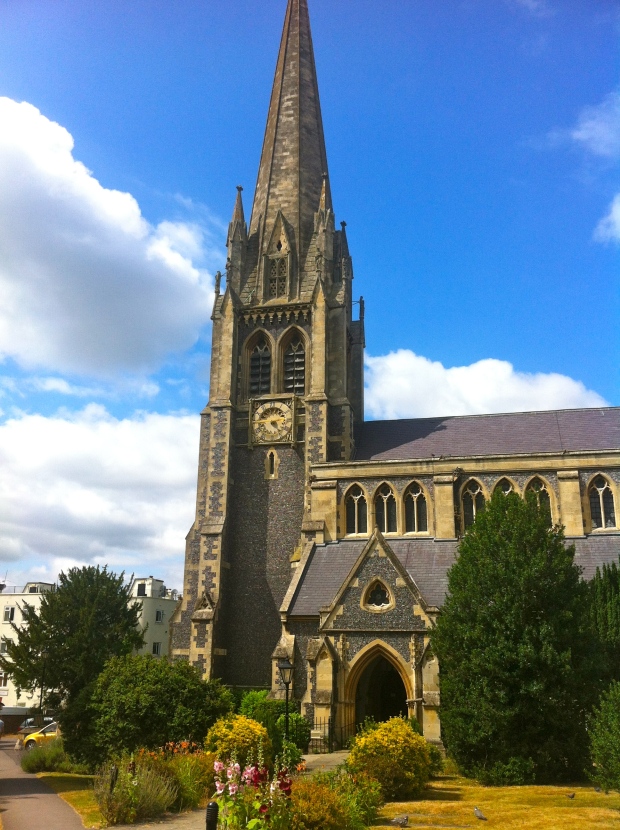 As the sun began to break through the clouds later in the afternoon, we decided to move on to our next destination. Firstly, however, we thought we’d stop off in the local town of Dorking to see if there was anything worth visiting. A depressing main high street soon gave way to a lovely range of little alleys and streets filled with higgledy piggledy 18th and 19th century buildings, most of which are now high end antique shops, and we were pleasantly surprised to find a beautiful and imposing church behind the modern shopping centre. There wasn’t much to write home about, though, and after 30 minutes of strolling, we headed back to the car and on to Box Hill. 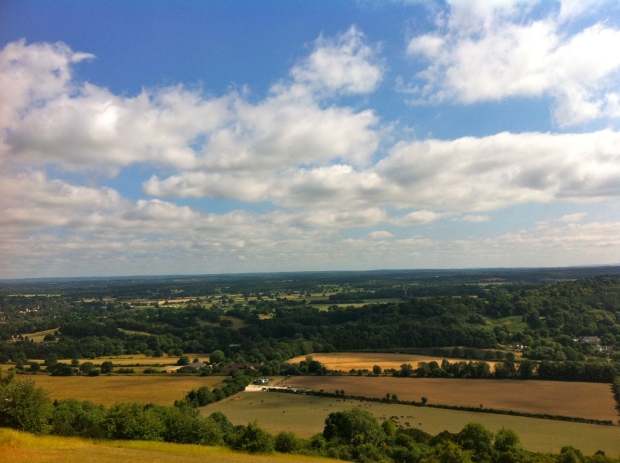 As all Austenites will know, Box Hill is the backdrop to a scene of great importance in Emma. Emma’s badly judged criticism of Miss Bates during the Box Hill picnic leads to a nasty ticking off from Mr Knightley, which I would argue is the catalyst for both Emma and Mr Knightley realising the strength of their feelings for one another. I have wanted to go to the real Box Hill and see the view that the Highbury picnickers would have enjoyed for years, but for one reason or another, I never got around to it. Driving up the incredibly steep and winding road to the top, I kept thinking what an ordeal it would have been to get horses and carts full of food and people up there, presumably before a proper road was built, too. Emma’s day to Box Hill would have been a real expedition. Nowadays there is a car park and a National Trust shop and cafe at the summit, which makes it all very civilised. After a cup of tea and a slice of coconut and cherry cake, my Emma and I went off on the signposted route to take in the main sights. First was the viewing point, which provides a truly spectacular view across three counties, followed by the grave of a man who was buried head downwards as he thought the world would eventually turn upside down and he would then be the right way up, followed by a derelict fort. Then, back to the car park. There’s not masses to do if you’re not into hiking, but the view is definitely worth the trip; we could have sat there and watched the world go by for hours.