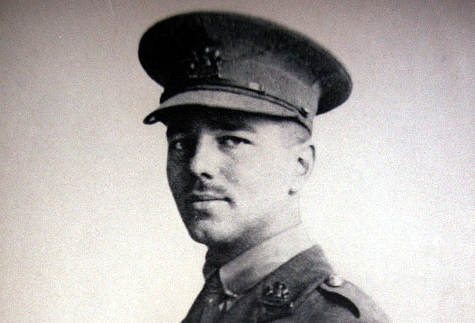 I read a fascinating article in the Times Educational Supplement this week about the version of WWI students get taught at school. It tied up nicely with my current study of The History Boys, which raises similar sentiments about the fiction of history. As an English teacher, I love teaching war poetry for its emotive power. We turn the lights off and close our eyes as someone reads, shutting out the modern world in an attempt to imagine the sounds, smells and emotions of the soldiers crouching in their trenches, waiting to go ‘over the top’. We gaze horror struck at images of bombed towns and bloated corpses, struggling to comprehend the experiences the poets put so hauntingly into words. We discuss the values of the men who went to war, considering the difference in our societies and whether, if war happened again on the scale it did in the early 20th century, we would see queues of our own contemporaries eagerly signing up to fight.

We are full of empathy, as one would hope, when we explore these vivid, horrific portrayals of war. However, we are also unconsciously full of patronisation. The poems tell us that the soldiers didn’t know what they were doing. They were lambs to the slaughter. They were exploited and lied to and died for nothing. We can’t help but come to these conclusions from the literature the war left behind. Owen’s terrible words are burned into the public consciousness; ‘my friend, you would not tell with such high zest, to children ardent for some desperate glory, the old lie; Dulce et Decorum est Pro Patria Mori.’ Kipling’s anger was expressed in his brief, bitter couplet; ‘if any question why we died, tell them, because our fathers lied.’ However, as John Blake says in his article, this is far from the reality. The poets were upper class, educated men, subject to a whole different set of morals, values and expectations from their comrades from the lower classes. They were not representative voices of the average soldier. Using their words as the authentic experience of war is like using Dickens as a realistic representation of life for the average person in the 19th century. And, as Irwin, the renegade history teacher in The History Boys tells his sentimental students; if the war was as bad as Owen and Sassoon said, why were they so desperate to keep fighting in it? ‘[They were] surprisingly bloodthirsty,’ he comments, with no hint of irony.

Blake raises a number of excellent points in his article, and quotes some surprising statistics. So used are we to the rhetoric of the tragedy of the slaughter of ‘a generation’, few of us realise that around 80% of enlisted men returned back to their homes. Not quite the decimation of the male population we are led to think by the likes of Vera Brittain, whose personal grief perhaps overshadows her rationality when it comes to assessing the true impact of the war. In the 1970s, Martin Stephen, a historian, interviewed hundreds of WWI veterans. None recognised the portrayal of war seen through the famous poets’ eyes. Instead they remembered having good food, good hospitality from the French and a sense of purpose and camaraderie. Many expressed their frustration and distress at the attitude of subsequent generations, who dismissed them as ignorant of the causes of the war and mere cannon fodder. ‘They were clear why they had fought and satisfied that the war had been worthwhile,’ says Blake. For many, the war had offered them more than they had at home and they had gone in with their eyes fully open. They may have seen many dreadful things, but the bitterness shown in the poetry we have used as our version of events for so long was not shared by the veterans. They did not see themselves as the lied to victims Owen so famously portrays.

So how and why do these myths of representation come into being? Why do we choose to continue to believe them, even in the face of directly contradictory facts? Well, as Blake says, this myth was adopted by the educated classes as it reflected their own shock and horror at the scale of a war none of them saw coming. It rocked their safe and comfortable existence in a way that would leave them changed forever. I also think Blake misses the opportunity to explore the fact that many upper and upper middle class families were hit disproportionately by the war; their sons enlisted early, were promoted to higher posts, and as such were on the front line and in the path of danger more frequently. They were the angry and bitter ones, and they were the ones in the position to create the lasting public memory of the war. So, as usual, we have a history that has been formed from the point of view of the privileged few rather than the majority, whose voices have been left unheard. But where would we be if our canon of war literature explored positive aspects of the conflict too? What impression would that have left for future generations? For obvious reasons, we cannot allow ourselves to see the war in any other light than as a tragedy. However, ultimately, through continually choosing to see it as such, we devalue the ‘glorious dead’ we claim to revere. Would they really appreciate being remembered as victims, as naive young men, led blindly into the gates of hell by incompetent generals? I certainly wouldn’t. It might have assuaged the guilt of the middle classes in 1918 to do so, but from our historical distance, surely it is time for us to collectively recognise that there is no worse way to commemorate than to patronise with our pity.