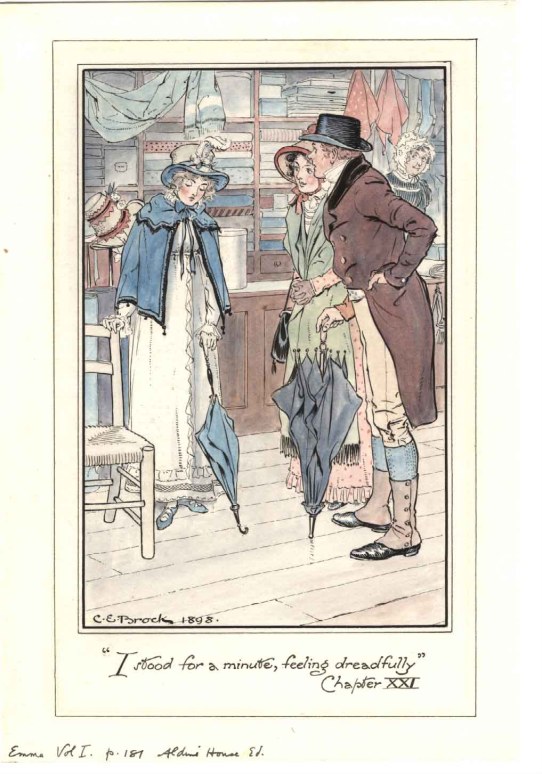 Eating humble pie is not something I enjoy doing, but when I’m wrong, I’m willing to admit it. As an English teacher, one of the aspects of my job that I enjoy the most is the opportunity to reread texts and look at them from fresh perspectives as I prepare to teach them to my students. It’s vital that I can put my own personal opinions aside and present the novel as a blank canvas where any interpretations can be valid; I can illuminate the text and offer suggestions, but I strive to never influence students with my own reading of the characters or authors’ intentions. So, when I am reading with a mind to teaching, I force myself to read more carefully, more considerately, more thoughtfully. I immerse myself in the context of the novel’s period, to place the character’s actions and thoughts within the norms of their time. I refrain from judgement and strive to be dispassionate. And when I do that, I start to see things differently than I did before, and the text comes alive in whole new ways.

Over the last couple of weeks, I’ve been rereading Mansfield Park. I have to teach it to my GCSE class next year, and initially, I wasn’t happy about it. As some of you may remember from when I reread it a few years ago, Mansfield Park has always been my least favourite Austen. When I first read it, I couldn’t understand how Jane Austen could have written such an insipid heroine when she had created so many fabulous ones in her other novels. Where was the wit, the sparkiness, the sass? Where was the striding across muddy fields, the arch looks, the independence of spirit? Fanny Price was just pathetic, Edmund Bertram the least romantic hero ever, and Mary and Henry Crawford, who were clearly supposed to be unlikeable, were the best characters in the novel. As well written as Mansfield Park is, I thought it was deeply unsatisfying on many levels, and definitely not a book I could ever love as I do Austen’s others. I knew all of the context, I understood Fanny’s position as a poor dependent, I could see objectively why Fanny was the way she was, but I just couldn’t care less. And, as I knew I wasn’t alone – there have been actual Fanny wars fought (this actually exists! Though it sounds hilariously naughty to an English ear) – I felt totally justified in my negative opinion. Everyone hated Mansfield Park, so I didn’t need to try and like it. That is, until I needed to prepare it to teach.

Well. What a different book I found! Mansfield Park is the poster child for critics countering the claims that Austen ‘merely’ wrote domestic novels (because obviously what happens in the domestic interior is of no importance at all), as the characters live on the proceeds of slavery; Sir Thomas Bertram owns a plantation in Antigua. The luxurious life in the ‘modern’ built mansion of Mansfield Park is only possible thanks to slave labour, and with slavery forming the background of the novel, the fact that the Bertrams have a niece living in the battered former schoolroom in the attics who is told that she needs to remember ‘who and what she is’ at all times makes for uncomfortable reading. As I began to consider that Fanny is, to all intents and purposes, a slave in the Bertram household, I started to see her entirely differently. While not treated unkindly, she is subject to the whims of all around her, and has no control over her own life. She cannot ask for anything, cannot complain, cannot refuse. She is enslaved by the need to show perpetual humility and gratitude, forever aware of the fact that she is only at Mansfield Park thanks to the kindness of her uncle and can quite easily be returned from whence she came should she prove herself to be in any way undesirable, or undeserving. How can she be spunky and sparky and cutting and witty when she has no right to anything or anybody and lives in a house where she has no certainty of being able to remain? How on earth could I have expected her to be anything but meek, and how could I not have recognised her bravery in standing up for herself when pressed to do things against her conscience, knowing that in doing so she risked everything that she held dear? And goodness me – how on earth did I think Mary and Henry Crawford were so wonderful? They are utterly shallow, insensitive, cruel, mercenary – they might be funny and independent and utterly outré, but they are all of those things to the detriment of those around them. They are horrible people. Horrible. The scales have fallen from my eyes.

I am not backing down when it comes to Edmund Bertram – I still think he is totally useless – but I can forgive Austen that. What I can’t do is forgive myself for having been such a blinkered reader. In looking for something in this novel that Austen never wrote into it, I missed its point entirely. Mansfield Park isn’t like Austen’s other novels, but that doesn’t make it any the worse for it. This is a fascinating novel, so rich and complex, so well written and so fantastically characterised. Two hundred years old, its characters and their emotions and motivations still ring absolutely true to a modern day audience. Edmund Bertram’s total inability to see Mary Crawford for who she really is is a brilliant depiction of how blind love can be. Henry Crawford’s callous delight in making women love him, only to blithely discard them when he is bored, is a perfect portrait of narcissism. It’s going to be so much fun to teach this book, bringing the characters and their world alive for my students. I can’t wait to see what they make of it.

So, readers, I was wrong, and I am glad to have been so. This experience has reminded me of what is so amazing about the written word; come at it on a different day, at a different time of life, in a different mood, and you can see something entirely different in the exact same letters that left you cold before. I’m now considering where else I could have gone so spectacularly wrong in my past reading…I feel there’s got to be a lot of literary humble pie out there for me to eat, as there are many classics I’ve hated…Anna Karenina, Madame Bovary, War and Peace, Wuthering Heights…the list is endless!

p.s. In preparation for teaching Austen, I’ve been reading a lot about her, as well as her novels, and I very much enjoyed Lucy Worsley’s new biography, Jane Austen at Home, which was an informative as well as entertaining read, with a particular focus on Austen’s relationships with her domestic environments. I highly recommend it!