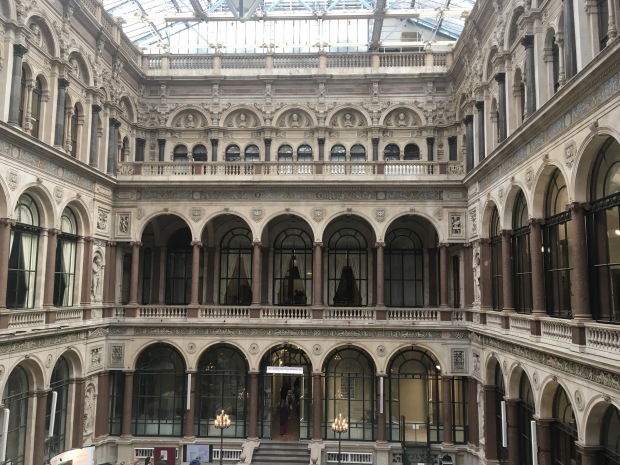 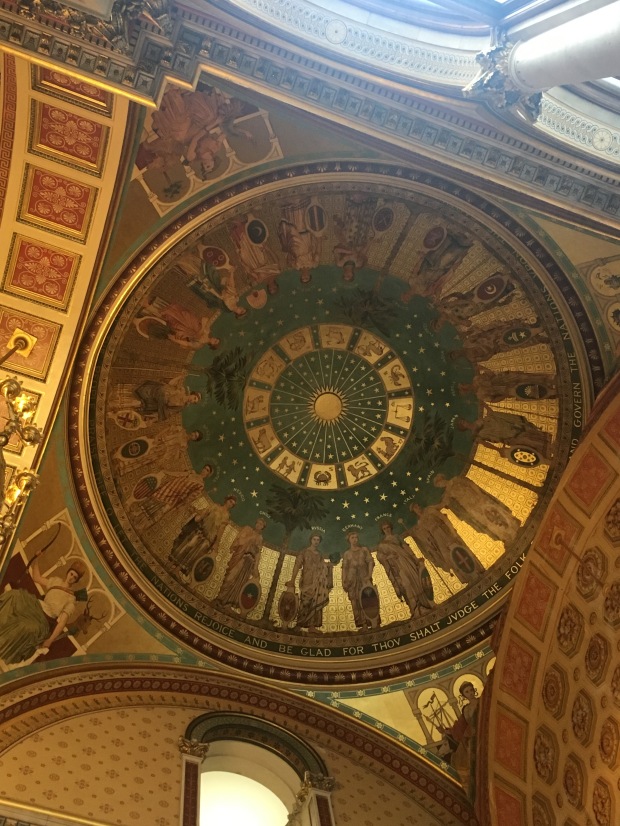 This weekend was London Open House and despite already suffering from back to school lurgy, I was determined to make the most of it and have a look at some places I would never normally have access to. Top of my list was the Foreign and Commonwealth Office, which has a fantastic late Victorian interior, and was, unbelievably, almost demolished in the 1960s after falling into considerable disrepair. Thankfully sensible people stepped in and it has now been fully restored. We were allowed to see all the formal state rooms, including the impressive, glass ceilinged Durbar Court, part of the old India Office, which is a real monument to Victorian Imperial values and a truly breathtaking space, and the amazing Grand Staircase, with beautiful wall murals and ceiling paintings celebrating Britain’s virtues. It’s a real feast for the eyes, and there was also the added sense of excitement and interest in knowing I was walking in rooms where so many significant decisions and treaties have been made throughout history. I also really enjoyed reading the information panels on the realities of diplomatic life; I once had notions of being a foreign diplomat myself, but now I’ve read what it’s like to live in a hut in the middle of nowhere, surrounded by rats and kept awake by mangoes falling on my head in the night, I think teaching was the right choice!

After spending a good hour at the FCO, I walked a little further down Whitehall to see the Banqueting House, the last surviving wing of the once great Palace of Whitehall that largely burned down in the 17th century. It’s not particularly much to look at – it’s an early example of Palladian architecture and has some lovely ceiling paintings, but it’s not heavily decorated or filled with treasures. However, what makes it special is that it was the place from where Charles I walked to his execution, and as I have always had a bit of a soft spot for poor Charles, it was quite special to be in the place where he breathed his last. There was also lots of information on masques at court in the 16th and 17th centuries, which was very interesting, and the Banqueting Hall certainly does look like an amazing place for a party. 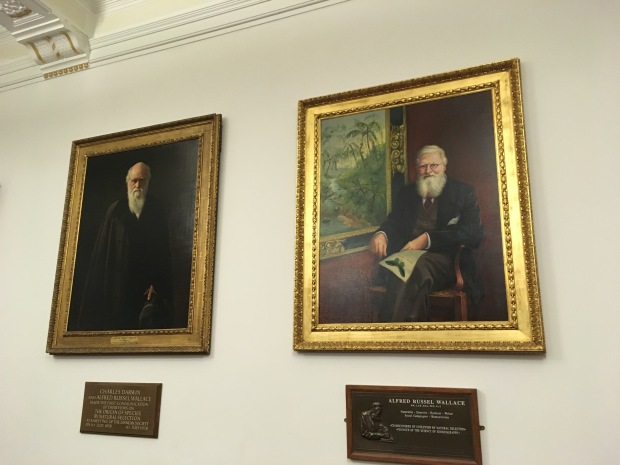 I then walked up to Piccadilly, where I wanted to visit two of the scientific societies, the Linnaean Society and the Geological Society. Having of late become fascinated by the history of botanical and geological history in the nineteenth century, I wanted to see the places where the fascinating people I’ve been reading about read out their lectures and debated their theories and deposited their specimens, and I certainly wasn’t disappointed. Standing beneath the portraits of Charles Darwin and Alfred Russell Wallace in the meeting room of the Linnaean Society where these men’s papers on the theory of evolution were first read out was awe inspiring, as was seeing some of their belongings in the beautiful library upstairs. Even more thrilling was my visit to the Geological Society, where I got to see the famous specimen of Mary Anning’s icthyosaur, as well as the very first geological map of Britain made by the now unjustly forgotten William Smith. It was a wonderful experience to be in these halls of learning where many of the now common knowledge understandings we have about the world around us were first made public by the pioneering scientists of the nineteenth century. I can highly recommend a visit, and both of these societies do have quite frequent public lectures that are open to everyone. 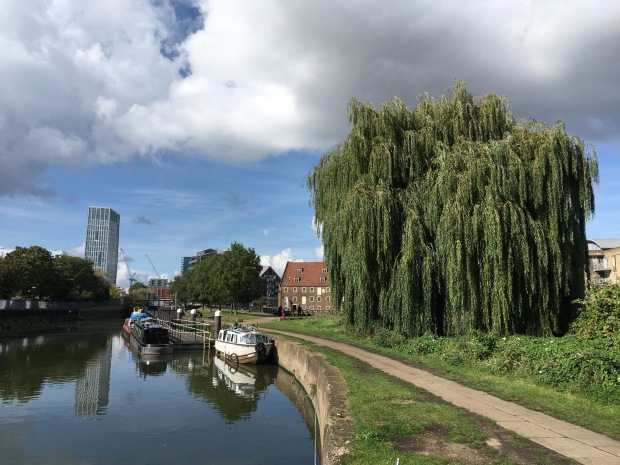 My last Open House port of call was to a location a mere twenty minute walk from my own front door, and that I didn’t even know was there until I saw it listed on the Open House website. Walking along a busy road lined with modern flats and houses, you suddenly come across a bridge with steps that takes you down to the Limehouse Cut canal, which runs through East London from the Lea river to the Thames. It is a straight canal that largely takes in an industrial landscape, but it’s lined with gaily painted narrowboats and willow trees, and is a lovely place for a sunny afternoon stroll. I’ve walked parts of it before, but I’ve never gone as far East as I did today, and to my surprise, as I turned a bend, I came across the Open House location I was heading for: House Mill, the world’s largest tidal mill, and a 17th century gem. Like the FCO, it was almost demolished in the 60s to make way for a car park, but thankfully it was saved and is now a wonderful community space with a gallery, cafe and rooms to rent for all manner of activities. I missed the tour, unfortunately, but I still had a lovely time walking around and feeling as if I had just gone back in time by 300 years. I love that even though I’ve lived in London for practically all of my life, I can still come across new places to surprise and delight me!

ps. Simon and I have just recorded our first podcast after our summer hiatus – you can listen to it here!