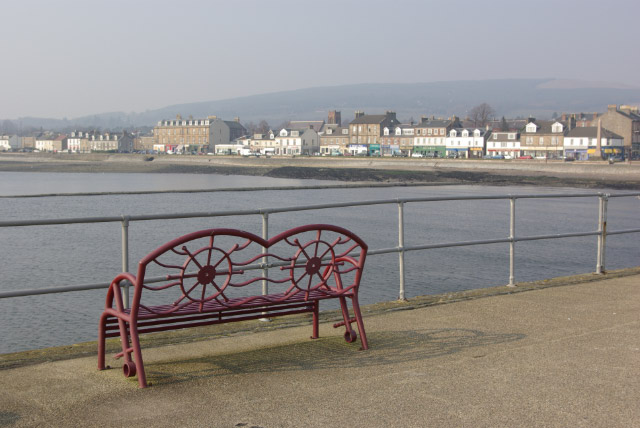 I was recommended this book by the lovely owner of the independent book shop in Grantown-on-Spey I visited on my recent holiday to Scotland. Had I just read the blurb on my own, I would have dismissed it, but her enthusiasm for the book won me over. I duly bought it and read it within two days, unexpectedly drawn into the world of a novel that requires plenty of suspension of disbelief on the part of the reader to work, but pulls it off to create a poignant and beautifully written story about two poets magically drawn together across time.

The novel opens with the young poet Wystan Auden arriving to teach at a school in the Scottish seaside town of Helensburgh in the 1930s. He doesn’t want the job; he can’t imagine anything worse than being stuck in the back of beyond teaching in a provincial boarding school. However, he needs the money rather desperately, as being a poet obviously doesn’t pay, and so reluctantly he heads to Larchfield school to start a new life, away from everything and everyone he knows. Fast forward to the present day, and Dora Fielding, also a young poet, is also moving to Helensburgh, but with her new, much older husband Kit, whose architect’s firm has a big job in the town. Pregnant and separated from her social and professional networks in Oxford for the first time, Dora is anxious about the move and not entirely sure they have made the right decision. They move into an auspiciously named sea front villa, Paradise, in which they have the ground floor flat. The flat is beautiful, but their upstairs neighbours, Mo and Terrence, take an instant dislike to Dora and Kit, and begin to make their lives a misery. At the same time, back in the 1930s, Wystan is having a terrible time at Larchfield. One of the other teachers has also taken an instant dislike to him, he has no social life, and he is desperate for a meaningful sexual connection. However, being homosexual in conventional Helensburgh in the 1930s is not conducive to the development of a functioning relationship, and even though Wystan has unexpectedly met a lover, they must operate in clandestine secrecy if he is to keep his job.

When Dora gives birth prematurely to her daughter Bea, her anxiety and loneliness grow ever worse. Mo and Terrance seem to take pleasure in ensuring their home is always filled with loud music and visitors who trample and park all over Dora and Kit’s front garden, and yet somehow it is Dora who has been painted as the nightmare neighbour, with Mo and Terrance’s friends accusing her of making an old couple’s life hell by her nastiness after she challenges them. As she gradually becomes more distressed and paranoid, and unable to express herself in writing, Dora feels she is losing her identity. One day, she goes for a walk on the beach and finds a message in a bottle, signed Wystan, and with a telephone number – she dials it, and finds herself connected to the Larchfield of the 1930s, now an abandoned relic – and to W.H.Auden himself. When she arrives at the school to meet him, she finds herself in the 1930s, and forming a friendship with a poet she has always admired, and who is able to bring her back to herself. However, as she increasingly seeks comfort in this new friendship, her grip on her own reality weakens. As her sanity is questioned, so is her capability of being a mother. But is Dora really meeting with W.H.Auden across time, or is he merely the product of a disturbed mind that needs locking away?

The dovetailing of these two vulnerable people, both living lives that have separated them from an essential part of themselves, was a stroke of genius on the part of the author. She has made a truly meaningful and moving exploration of loneliness and isolation that works as both a chance to shed a light on an intriguing time in W.H.Auden’s life as well as on the experience of new motherhood. While I found it ever so slightly unrealistic that neither Dora’s husband nor her health visitors pick up on the fact that she clearly has post-natal depression and needs support, I didn’t find it hard at all to believe in the connection between the two poets over time, as I chose to interpret it merely as a figment of Dora’s imagination. The book is written in a beautiful, lyrical, poetical voice that clearly reveals Polly Clark’s own poetic talents, and is a truly mesmerising piece of fiction that fully swept me away to the wide, bleached skies of the Scottish coast. I would really encourage you to give it a try!