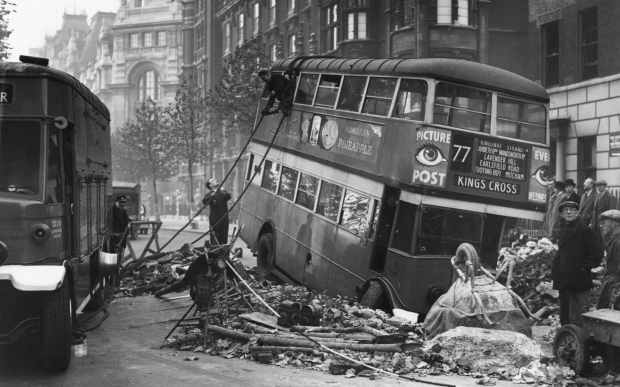 There is something so incredibly powerful in reading accounts of WWII written by people who were experiencing it as they wrote. Elizabeth Bowen and Mollie Panter-Downes are two of my favourite female chroniclers of what it was like to live within a Blitz-ravaged London, their descriptions of the tense headiness of a life lived on a tightrope of ever possible destruction a sobering reminder that the war was not just fought on distant battlefields. Inez Holden is not a writer I’d heard of before, but the introduction to Handheld Press’ new edition of her novella, Night Shift, and her diaries, entitled It Was Different at the Time, explains that she was very much a figure on the literary scene at the time, living in H G Wells’ flat and mingling with many of London’s movers and shakers at parties. She wrote for the BBC and was recognised as a considerable talent, but she never reached the heights of fame she felt she deserved, and after the war, sunk into obscurity. Night Shift was her most critically successful work, and is a largely autobiographical account of the lives of those who worked the night shift in a factory during the war, and publishing it alongside her diaries was a marvellous idea, as it allows you to then appreciate the real-life experiences that informed the events and characters she depicts. I absolutely loved reading these, and am delighted to have discovered Inez Holden, whom I have every intention of researching further, and seeing if I can unearth more of her work.

Holden is particularly brilliant at capturing the idiosyncratic speech of the various workers in the factory, and the banality of much of their conversation. Amidst the constant bombing and the destruction of the surrounding streets, life goes on within the factory, and there is more bickering over who is getting paid what and whose turn it is to make the tea than there is talk of world affairs. The war, Hitler and the bombs are all treated with a flippant joviality that suggests a community that has found a new normal, and no longer truly sees the danger around them. Once accustomed to it, the workers get on with their lives much as they did before, albeit with the inconveniences of black outs, unreliable transportation and rubble blocked roads. The moments of horror – once familiar streets transformed into blackened shells, dismembered corpses lying in front gardens, colleagues killed in air raids – are experienced through a veil of numbness that demonstrates more powerfully than any description of physical destruction the true impact of the war on the psyche of everyday Londoners.

I found Holden’s writing beautiful, and her eye-witness accounts of the Blitz absolutely fascinating and really quite harrowing to read. These are insights that should not have remained hidden, and would be a valuable companion to anyone seeking to understand more of what it was like to experience the Blitz firsthand. I’m delighted that Handheld Press – a wonderful independent publishing house – has brought Holden’s work back into print, and I can’t recommend this more highly.