It’s amazing how much you can miss of your surroundings when you live in a large city. I love the village feel of my neighbourhood, but it means I can get lazy of a weekend or evening. I have everything I need right on my doorstep, and so venturing farther afield has become a bit of a rarity, especially when the weather is cold and wet and spending too much time out of doors is an imposition. However, last weekend I decided it was time to spread my wings. Accompanied by a good friend, we went walking from Clerkenwell, where I live, down to the Barbican, which is a midcentury Brutalist development in the City of London that mixes residential property with a publicly accessible arts and cultural centre. It’s the home of the London Symphony Orchestra, houses a school and a university, the Museum of London (though not for much longer), a theatre, cinema, library, art gallery, lake and garden area, indoor conservatory garden, restaurants, bars…as well as hundreds of flats. It was designed as a mixed use community to encourage families to stay in the centre of what was then still a bomb-ravaged London rather than moving out to the suburbs, and though it is now more the preserve of well-to-do professionals and older couples than families, it still offers a fantastic oasis in the heart of the city. You can lounge around in the communal spaces and enjoy a coffee and a good book, sit on the terraces by the lake and watch the world go by, stroll through the conservatory garden (only on Sundays though) and catch an interesting film or exhibition. It’s a little like being on a university campus, and it’s a wonderful place to while away a few hours. 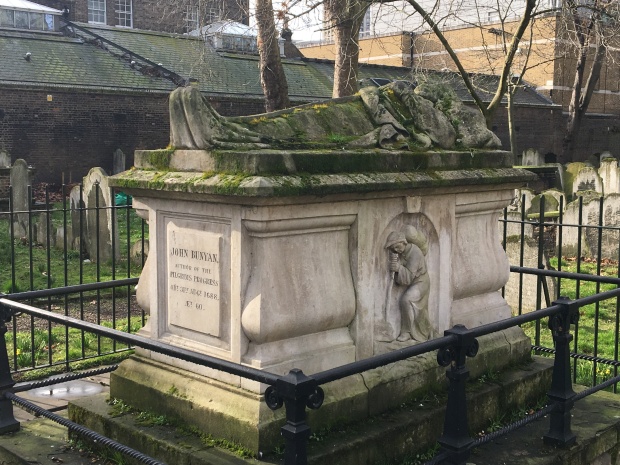 Close to the Barbican is a cemetery I’ve never visited; hard to believe, seeing as it’s half an hour away from my flat, but I’d simply not ever had reason to walk past. I wanted to visit after a colleague mentioned it’s where William Blake is buried – I had no idea! – and so on our way, we popped in. Bunhill Fields is the burying place of several of our early literary greats, and has always been connected with nonconformists; Daniel Defoe and John Bunyan are here alongside Blake, and it’s a rather surreal experience to wander in this patch of consecrated ground filled with beautifully carved, largely 18th century gravestones, in amongst the high-rise flats and office blocks that have sprung up in the Old Street area in recent years. To protect the graves, they are all gated and locked, and you can only go up close with a registered guide, but it’s still well worth walking through to catch a glimpse of some of the impressive monuments. Opposite Bunhill Fields is John Wesley’s church, now a museum of Methodism, another site I hadn’t known was there: I have made a note to go back and visit another time.

We meandered our way back up to Exmouth Market for brunch, passing as we went some interesting ghost signs on buildings, and seeing some marvellous examples of now repurposed Victorian architecture. We also stumbled across an old priory, the Order of St John, which has a beautiful crypt and garden to explore, squeezed in amongst modern flats and offices; it never ceases to amaze me how much history remains here, hiding in plain sight. I’ve lived in London almost all of my life, and yet this walk reminded me of how much I still don’t know about the city, and how many places I still have left to explore. You could spend a lifetime walking these streets and still only have scratched the surface. There are so many layers of history here, so many clues to the past left hidden in nooks and crannies, visible only if you know where to look. Just the other day, when going to run an errand to an office down a side street I’d not been to before by St Paul’s, I noticed for the first time a plaque pointing out where Thomas Becket (of Canterbury Cathedral martyrdom fame) had been born – I must have walked past that plaque hundreds of times and never seen it. I need to remember to keep my eyes open, and to take more detours. My final detour of my weekend walk was to take a roundabout way back to my flat, and I was surprised by the arrival of Spring in one of the Georgian garden squares behind my road. Clouds of delicate white blossom were covering the trees, and the grass was carpeted in daffodils. What a joy to find a sprinkling of the countryside in the heart of the city; I breathed in the sweetness and rejoiced at the thought that winter is almost over at last.