In a couple of weeks I will be packing up and moving back to my mum’s house in preparation for my teacher training year. Unfortunately teacher training doesn’t pay you enough to live independently (thanks government!), so I am having to kiss London goodbye for a little while. As such, I am anxious to make the most of the time I have left living here, so last weekend my flatmate and I had a wonderful time revisiting our favourite haunts. On Saturday, we walked up Highgate Hill, cutting through lovely Waterlow Park on our way to Highgate village. We then walked all the way through Highgate, past the amazing Gothic model village that I would cut off my arm to get to live in and past the cemetery until we came out at Parliament Hill, which is part of Hampstead Heath. Parliament Hill has an amazing viewing point over London and is a very popular spot for locals to congregate on a sunny day. As we wandered our way up to the summit, we marvelled at the impressive kites soaring overhead and kept looking back over our shoulders to see the skyline of London slowly appear above the trees. On reaching the top we both gasped in wonder at the glitter and flash of the buildings below, spotting the dome of St Pauls dwarfed beneath the spire of the new Shard and Canary Wharf winking in the sunlight. It is a truly magnificent view; the best in London if you ask me, and definitely worth the trek!

From Parliament Hill we made our way through the beautiful mellow red brick streets of Hampstead, passing George Orwell’s old flat and popping into Daunt Books on our way to Hampstead High Street. We looked around the shops, most of which are a little bit too expensive for the likes of us, and enjoyed some people watching before jumping on the bus back to Archway, which is distinctly less beautiful, but has a community spirit that I love. Everyone knows everyone else, largely due to the fact that most people have grown up here, and while it might be a little run down and shabby around the edges, there is a lively market on the weekends and plenty of independent and interesting cafes, restaurants and shops to enjoy. I will miss it enormously. 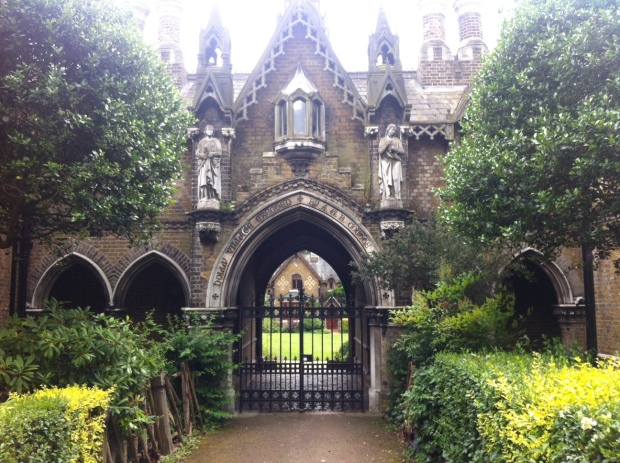 On Sunday we went over to The Bull and Last, an absolutely delicious gastropub overlooking Parliament Hill, for Sunday Lunch. I first went here a couple of years ago as part of a V&A staff Christmas outing, where we had a tour of Highgate Cemetery and then came to the pub for our Christmas dinner, which was so divine that I can still taste the happiness it brought. I have been boring my flatmate with stories of how good the food is here for months, so it was with much anticipation that we sat down for our roast beef. We weren’t disappointed; the plate was piled high, everything was cooked to perfection, and we had lovely views of the park to enjoy out of the window. The best was yet to come, however; for dessert we ordered homemade ferrero rocher ice cream, which was the best thing I have ever tasted. Little balls of chocolately-nutty goodness rolled in caramel wafer…divine. If you’re ever in the area, you must visit. They also do a magnificent fish and chips that shouldn’t be missed. 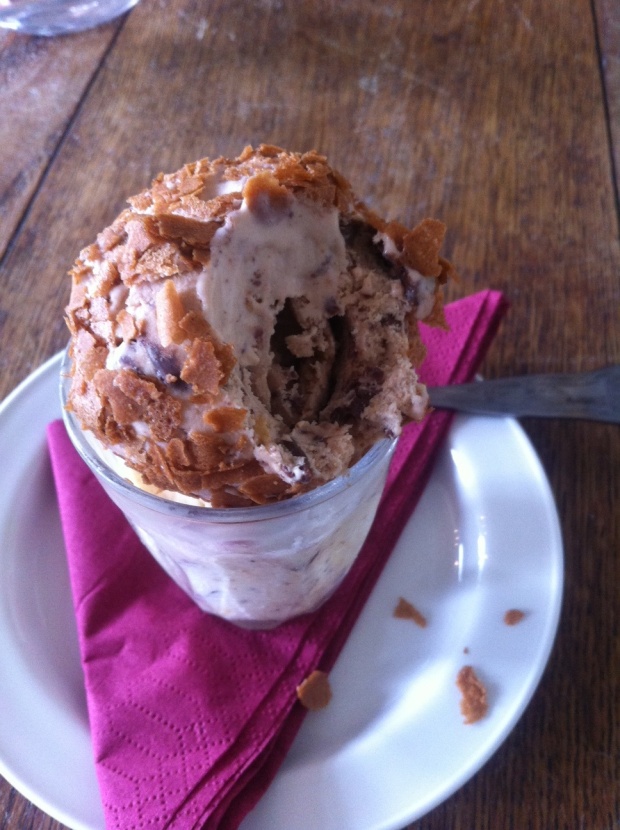 Full to the brim, we hurried up the hill to Highgate Cemetery just in time to catch the 3pm tour. I haven’t been for a long time, and have never been in the summer months, so I was excited to have a fresh look in a new season. Our tour guide was wonderful and impressed me immediately by offering a new insight on the first grave we came to on the tour. This is of a coachman whose name I can’t remember, but he made his fortune in the 1830s and 1840s and has the name of his coach on his monument. He is pointed out on all tours, but I had never been told his story properly before. I had assumed, as he was a coachman, that he’d owned some sort of omnibus, but the guide explained that actually he was the owner of the ‘Old Time’ coaches, which gave heritage tours on old style coaches between London and Brighton. By this time, the railways had overtaken horse-drawn coaches, and early Victorians were fascinated by the forms of transport used by the generations before them. I loved the idea of this nostalgic tourism – just as we enjoy steam trains now, the Victorians too were enthralled by the past and saw it as the ‘good old days’!

Highgate Cemetery’s beauty never fails to delight in any season. However, I especially loved seeing it full of greenery and flowers, as I have only ever experienced it bare branched and mulchy in the depths of winter, which made it hard to imagine the original vision of the cemetery as a pleasure garden. Though there is little left of the landscaping that was once tended by a small army of gardeners, the twisting leaves that frame the monuments and occasional snatches of fragrance from flowering bushes give an impression of how lovely this place must once have been. Excitingly, there is now access to the Dissenter’s Cemetery, which is totally overgrown and features the graves of a number of interesting people who were not Church of England. I have only ever seen this section from the road, and I wish I could have spent more time exploring. There is a house in this section, too, which is a 21st century glass affair that has spectacular views across the cemetery; I’m not sure if I’d want to live there though!

Once the tour was over, we walked back home through Waterlow Park, enjoying another lovely view across the skyline of London. I will certainly miss this vantage point; nothing is so beautiful as seeing London laid out sparkling at your feet.